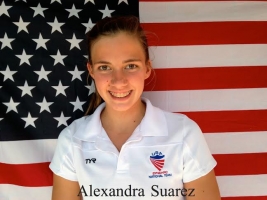 April 10, 2014 (San Diego)- The East County has produced many superstar athletes for several years now. Most of the athletes have come via land, however  a Seastar has been born right here in our own backyard. The San Diego SeaStars, formerly the Sweetwater Dolphins established in East County back in 1977, practice at Mount Miguel High School in Spring Valley four times a week.

Alexandra  Suarez, 14, is the newest Star.  A resident of Carmel Valley, she has been swimming  since she was 10 years old. She is currently in 8th grade and loves the sport of synchronized swimming. Suarez was one of the select few, and has earned a spot on the 13-15 age group national squad. Only 20 girls were chosen from around the globe to join the squad.

The 20 girls chosen will enter one last phase of the tryouts in May, where 12 girls from the squad will be selected for the national team to represent the United States at the Comen Cup on September 7-14,in Europe and at the UANA CHAMPIONSHIPS, August 12-17 in Riverside, California.

The San Diego Seastars organization has a history of success, with a fantastic mission statement: “As San Diego’s finest synchronized  team we continue to strive for excellence in the sport of synchronized swimming by developing athletes who demonstrate respect, maintain accountability, friendship. “

Synchro swimming used to be called water ballet. The first recorded competition was in 1891, in Berlin, Germany. The sport simultaneously developed in Canada. In 1924, the first competition in North America was in Montreal with Peg Seller as the first champion. Tracie Ruiz and Candy Costie won the first gold in the 1984 olympics for the United States first synchronized swimming team.

One of the two teams training in San Diego are currently training to qualify for regionals. The next big event is May 30-June 2014 at Valhalla High School in El Cajon. The address is 1725 Hillsdale rd. Entries are open to masters age group, Intermediate, and novice. It should be a lot of fun and these girls would appreciate the support from the local community. I will be attending, will you?