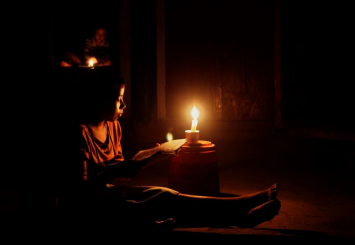 November 16, 2018 (San Diego’s East County)—With wildfires raging in northern and southern California, where power lines are suspected of causing deadly blazes,  residents in San Diego’s rural and mountain communities have been grappling with serious challenges posed, conversely, by a utility company shutting off power to some 30,000 residences during high winds this week in an effort to prevent fires.

Backcountry blogs sizzled as residents eventually able to access the internet posted a litany of complaints including life-threatening issues.

Supervisor Dianne Jacob, in a letter to PUC president Michael Picker on November 14th, calls for an end to proactive power shutoffs, which she calls “unacceptable and irresponsible.”  Such shut-offs mean electric wells won’t pump and people with medical needs are left on their own, she notes, adding that utilities should instead be required to fully fire-harden their equipment.

Diane Krieck Ang wrote, “Thank you, Dianne. Can you manage to get a seat on the CPUC (California Public Utilities Commission?” Maybe that would help!”

Tina Holley wrote that “foster/adoptive families with special needs children that have feeding machines appreciate you going to battle. Our lines were underground and they still shut us off. We have adopted 6  kiddos and have 7 in the home, we were forced to spend money we don’t have on a generator so our food doesn’t spoil and to charge our little guy’s machine.”

Debbie Rhoades noted, “It’s dangerous to citizens of any power outage especially late at night in the dark; if something should happen we can’t even see to get help,” adding, “We can’t even open our garage doors to get our cars out.”  She voiced anger at SDG&E for putting residents lives at risk to save their liability costs due to “faulty equipment.”

Kim Daley Carr said the latest shut off cost her family over $1300.

Denise Grasse implored SDG&E to “turn on our power so our children can go to school!!!”  At least six school districts closed all schools during the outage, some for multiple days.

Cindy Knight Shultz posted, “We need notice to make sure the water sources are accounted for. Horses cannot live without water, and the fact we had no warning means we can’t prepare.”

Nicki Demakis asked if SDG&E could send text warnings to customers shortly before outages, to allow time to take cars out of garages and buy ice to save refrigerated goods.  But other residents told ECM they received numerous warnings of impending outages, and often the outages did not occur, making it difficult to know when to prepare or not.

Dave Selleck complained, “All my fish from Alaska is spoiled.”  Ross Radford said she had to buy a generator to avoid losing $500 worth of  meat in his freezer.

Gary Whaley quipped, “Maybe Sempra should allow rural East County to dine at their Sempra 9th downtown cafeteria during these shut down times…pretty high end for the elite Sempra employees.”

Patty Steele objected to paying higher time of use rates that penalize her family for doing laundry or running air conditioning at certain times of day, causing them to pay higher rates while doing without power during the intentional outage.

A resident of the Santa Ysabel Native American resident wanted to know why Julian had a generator and downtown Santa Ysabel had its power stay on, while reservation residents were left in the dark for two days. “Is it because they’re white and we’re brown?” he asked.

On the Descanso Neighbors Facebook page, Tina Sutherland wrote, “I’m really debating on calling SDGE with three screaming babies on speaker and ask when our power will be back on.”  She added that when she took the three small children to an SDG&E resource center “They didn’t even want me to take them out of the car. They did get me the password so I could sit in my car and use their WIFI.”

Another resident told ECM she went to an SDG&E community resource center in Descanso, only to find it had no power and no way to charge her laptop or cell phone. SDG&E opened several community resources centers that it had said would provide these services to customers without power, along with water and snacks.

ECM sent an email to SDG&E asking about many of these problems, but communications manager Joe Britton did not respond to any of the specific questions we raised.  He did reply to state, “Our Emergency Operations Center is currently activated and we have limited resources today,” on Monday.  “We will do our best to provide as much information as possible. Please also visit www.SDGEnews.com for the latest updates on the Public Safety Power Shutoffs.”  As of Friday, he has not followed up with any addition answers to the questions we asked.

In a memo sent to the East County Chamber of Commerce, SDG&E public affairs manage Joe Gabaldon justified the de-energization of lines by noting strong gusty winds were forecast (and winds of up to 86 miles an hour were later recorded near Julian, with winds over 80 miles an hour in several other East County communities). In addition, low humidity and very dry fuels combined to create “extreme” fire potential, he wrote.

Gabaldon added that once power is shut down, it can’t be restored until SDG&E determines that conditions are safe.  Factors include length of line, terrain, when an outage occurs and whether aerial patrols are possible at the time. He thanked the community for “your understanding as we work to protect the safety for our region during these extreme weather conditions.”

Other resources SDG&E has referred residents to include:

A few rural residents tried to make the best of the difficult situation.  Beth Landrum asked on the Descanso Neighbors forum, “How about positive experiences that we had during the power outages?  What do you do with your time?” adding that she made drapery tie backs, started a new book, cooked dinner in cast iron on a wood stove, and picked the last of the summer flowers before watching high winds blow everything else away.

One resident said she started a new painting.  Another said her family enjoyed playing board games with their children and plan to implement a weekly “no electronics” night.

Another Descanso resident said he cooked dinner on the fireplace and posted a picture of a metal grate with food roasting atop the fireplace flames.  Some said they got extra sleep, and one man quipped, “The wind kept my wife from ordering me to do yard work.” Yet another said life was fairly normal, thanks to a generator keeping things running.

One old-timer made light of others' complaints over a few days unplugged, stating he grew up without electricity, relying on kerosene lanterns and cooking on a wood stove.

That remark, however, fails to recognize that for some, power outages aren't mere inconveniences, but life threatening for those reliant on electric-powered medical equipment and for livestock owners who need to provide water for animals via an electric pump. It also doesn't acknowledge that for those with water tanks reliant on electric pump,  a property owner would be unable to dowse a fire if one occurs, unless the pump is on a generator which many impoverished rural residents can't afford -- let alone multiple generators to keep a home and outdoor equipment powered up. And in olden days, homes didn't have electric garage door openers, electric stoves and ovens, or computers that many people use to run a business.

Candles, kerosene lanterns, barbecues, fireplaces without adequate chimney spark arresters, and misuse of generators can all pose risks of starting fires and generators if not used properly also post hazards for people working to restore power. Carbon monoxide poisoning is a risk if certain items meant for outdoor cooking are used indoors.

While acknowledging that things could have been worse had a wildfire roared through, the general consensus among residents here is that they want SDG&E to be mandated to fire harden or underground lines, not put lives at risk through power outages.

Some called for a convening of high public officials post-election to discuss ways to avoid repeated power shut-offs by utilities during dry, windy weather while still keeping residents safe through improved, fire-hardened equipment.

It's been over a year and SDG$E can't figure out how to setup these "centers" or even notify people where and when they are open. Wonder how their managers manage to run the company on a daily basis? How about they really do not want to solve this problem?