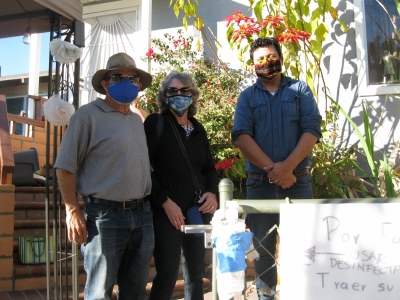 By Mimi Pollack
January 29, 2021 (La Mesa) -- 2020 was the year of the pandemic that brought shock, tragedy, and a big change to life as we knew it. It was also the year that proved to be a catalyst for those who started second careers or were moved to donate time and money to help others as many communities were hit hard by COVID-19.

In Sherman Heights, local resident Christian Ramirez put a table out in his front yard offering free fresh produce from his yard. That table, called La Mesa de la Justicia y Esperanza [The Table of Justice and Hope], started as a small project that grew and took on a life of its own, with East County residents donating food and funds to support the cause. 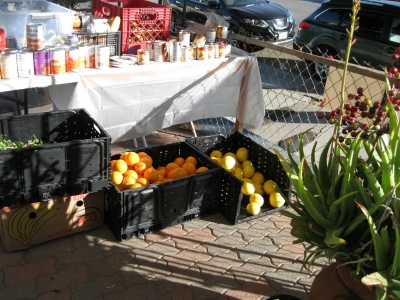 Ramirez, who works as a policy director of the SEUI United Service Workers West Union, was at home sheltering in place last spring, so in-between Zoom meetings, he decided to spend more time in his garden.  He proved to have a green thumb, and ended up with more produce than he, his wife and his son could consume.  Thus, he set up a table in his front yard and La Mesa de la Justicia y Esperanza was born.  Ramirez describes it as a mutual aid community pantry created to address the food insecurities in his historic barrio that was devastated by the pandemic.
Since it started, the table has really grown as more people and some stores began to donate food, etc.  The residents of Sherman Heights don’t always have much access to fresh produce, so a table that offers food and a sense of comradery is always welcome, especially for those who lost their jobs. Ramirez now has a group of volunteers and together, they serve about 300 families a week.
It is not surprising that the table has become so popular and has helped so many as Ramirez has dedicated years of his life to giving back to others. Living a life of service has been his calling for many years. In the 1990’s, he began to volunteer with the American Friends (Quakers) Service Committee (AFSC) and was eventually hired by them He worked with them for 15 years, including running their US-Mexico Border Program and their national immigration programs. He also led the national organizing efforts of AFSC’s immigrant rights programs, in 16 cities across the United States. Then, he directed the Southern Border Communities Coalition, a Southern border-wide organization which incorporated 60 community organizations in California, Arizona, New Mexico and Texas.
I met him at the Greyhound bus station in 2018 when we were assisting the asylees and refugees who were arriving from Central America. Today, he is assisting the residents from his long time neighborhood, .as well as Chula Vista, National City, and Lemon Grove.
La Mesa de la Justicia y Esperanza has received donations from multiple sources, including the La Mesa Sunrise Rotary Club.  They donated bags of citrus fruit that their members picked from private backyards that had surplus fruit. This Rotary club has been going around San Diego picking fruit from backyards to donate to various food banks since the pandemic began.  They like giving to more “grassroots” endeavors and are always happy to help communities in need.
Finally, because some of the residents lost their jobs and could not pay rent, several neighborhood cats were left behind, including a pregnant mama cat. The Ramirez family [Christian, his wife and son] adopted them and they are now taking care of 10 cats! The residents and cats of Sherman Heights are grateful. 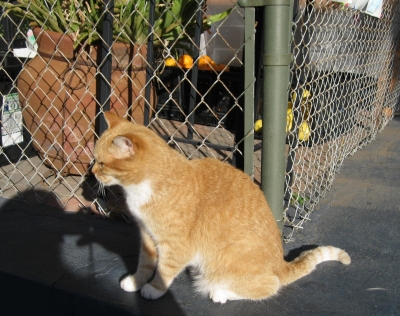 The table is basically open 24/7 and everyone is welcome to pick up or donate food items only as clothes or others items cannot be received because of the pandemic. People are asked to wear masks and use the antibacterial gel that is available. It is also like a neighborhood hub where stories and recipes are exchanged along with information on the importance of getting flu shots and where they are given.
This project is an example of one of the positive outcomes that came out of the pandemic.
For more information, visit their Facebook page: https://www.facebook.com/groups/justiciayesperanza