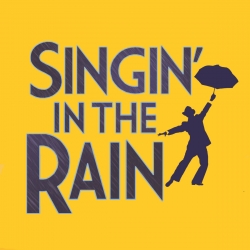 May 21, 2015 (La Mesa)--Why Singin' In The Rain? When asked this question Ed Hollingsworth, who  moved into his La Mesa home 31 years ago, at 4:17 am on his wedding day, called the play “the quintessential movie musical.”

Laura Bueno, resident of El Cajon, for 12 years, called the movie, a classic musical, iconic. both agree bringing "Singing In The Rain" to the stage is an amazing opportunity.

Ed appeared in his first show "The Music Man" 50 years ago this month.He performed in 35 shows at the Starlight and used to call it home. His new home is San Diego Musical Theatre. The people there his family. He credits Erin and Gary Lewis, the producers, for hiring professional and nice people.

If you saw San Diego Theatre's "White Christmas," the past few years, you may remember Ed as the General. A stand up job. In "Singin' In The Rain" he will be playing RF Simpson.

Laura loves working with Erin and Gary Lewis, two of the sweetest people you would want to meet. Laura also loves the fact San Diego Musical Theatre does such a variety of musicals, suitable for all ages.Laura first show with SDMT was in 2013's "Sound of Music." She will be in the ensemble on this one.

A teacher for 30 years at Grossmont High School, Ed taught drama for 22 years and math for 8. He is now retired but subs a lot for the district.

Teaching  ballroom dance, choreographing shows, directing children's theater shows, and teaching music at several different schools, are some of the activities keeping Laura busy when she's not in a play.

Ed's wife is a published playwright. His has instilled his loved of theatre in his four kids, all who have been involved in the theatre. One works for Cygnet.Theatre. Ed has appeared in over 150 productions. He also spent three and a half years on the road with the Serendipity Singers. Which included being the opening act at the Kennedy Center for the presidential inauguration in 1973.

Acting since she was thirteen, Laura has a BS in Music Education from the University of Missouri, and has performed with the Starlight Theatre, Lyric opera San Diego. She is also a core chorister with the San Diego Opera.

What was Ed's most memorable moment rehearsing for his role for "Singin' In The Rain?" Meeting Brandon Davidson. Brandon will be playing the Gene Kelly role in the play. Ed met Brandon when the both performed in "Peter Pan," at the Welk twenty one years ago. Brandon was nine."Brandon has grown into an incredible performer," says Ed.

Most memorable moment for Laura, was learning the choreography, she loves dancing so much. She also loved bonding with the cast, and making new friends. But seeing all the components of the show come together, sets, costumes, lights, orchestra, etc, you see what an incredible feat it is to put on a this kind of production.

For the run of "Singin in The Rain' SDMT will be partnering with "Voices for children."Ten percent of what they make on the show will be donated.to the You Give, We Give fundraising campaign, They collect in the lobby on your way out of the Theatre.