Most developed nations do not consider GMOs to be safe. In nearly 50 countries around the world, including Australia, Japan, and all countries in the European Union, there are significant restrictions or outright bans on production and sale of GMOs. In the U.S., the government has approved GMOs based on studies conducted by the same corporations that profit from their sale. Even though polls consistently show that a significant majority of Americans want to know if the food they’re purchasing contains GMOs, the powerful biotech lobby has succeeded in keeping this information from the public.

“I am worried about my food,” Dr. Robbins told ECM. “I’m beginning to get weird allergies that do not run in my family.”  Her allergies started after Monsanto began putting genetically modified seeds onto the market, starting with corn and soy. Alien genes that include animal, bacterial and even virus genes are inserted into the plant organism to make them resistant to bugs, she explained, but that this leads to junk DNA. “So putting foreign genes in organisms, there are changes in both humans and the organisms,” said Robbins, who feels we are being used as guinea pigs by Monsanto. Later, when she addressed the rally, she mentioned the increase in diabetes, obesity rates, asthma, allergies. In her mind this is not a coincidence.

Over 80% of all GMOs grown worldwide are engineered for herbicide tolerance. As a result, use of toxic herbicides like Roundup has increased 15 times since GMOs were introduced. GMO crops are also believed responsible for the emergence of “super weeds” and “super bugs:’ which can only be killed with ever more toxic poisons like 2,4-D (a major ingredient in Agent Orange).  The long-term impacts of GMOs are unknown, and once released into the environment these novel organisms cannot be recalled.

The main reason given by advocates of GMOs, to stop hunger through crop strains resistant to pesticides, has not come to be either. There are still many people starving in the developing world.  Dr. Robbins also pointed out that one of the arguments the companies make that they can’t label the food is expense. yet she had a carton of her Soy Milk, bought at a local store, that is clearly labeled Non-GMO. So that excuse, in her mind. is not valid.

Robbins is an adjunct professor at San Diego State University’s Department of Geological Science and is retired from the U.S. Geological Service.  She is also a member of Women Occupy San Diego.

Lorena Gonzales, Secretary- Treasurer of the San Diego and Imperial Counties Central Labor Council, an Occupy supporter from the early days, also spoke to the crowd. She said that this was also about working men and women. She supports a Yes vote on 37, since even people on the low end of the wage scale have no choice but to buy whatever is cheap. Gonzales tried to follow a CAL-Fresh budget with her family, and it was not easy. “I have four children. We can’t ban all kinds of foods that are bad for us, but I can’t control what goes into my kid’s mouths” since it is not labeled, she said. 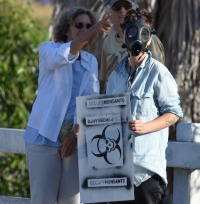 Christie Paris from Ocean Beach, who is also a member of Occupy San Diego Media group, told me that “I want to see our food labeled. If we can’t get rid of it, at least we have a right to know in the box.”  The Occupy San Diego General Assembly, the central organizing center of the Occupy Movement, which will not endorse candidates, reached consensus on supporting Yes on 37.

Paris also added that opposition to genetically modified foods is global, and there were demonstrations around the world on this same date. For more information see:

Baravi Guss from Carmel Valley had this to say. “I want my food labeled and I am concerned about my grandchildren, as well as the legacy we are leaving on the planet.”

Families, many with young children, joined in this march.

For more information on Yes on 37, visit www.carighttoknow.org

Now what are those who oppose Prop 37 saying?  The industry-backed forces funded largely by Monsanto argue that Prop 37 will raise food cost, that it is not supported by science, it will be a payday for lawyers, and that it has special interest exemptions. It will also mean a larger bureaucracy, ergo a larger government.  To view the No on 37 arguments, see