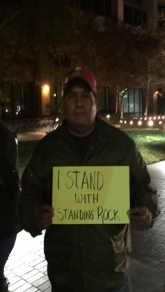 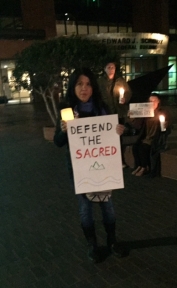 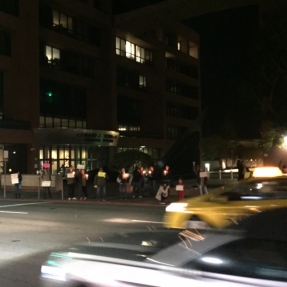 The group convened in front of the federal building downtown, chanting “The world is watching,”  “San Diego stands in solidarity with our brothers and sisters at the Standing Rock Sioux tribe,” and “Water is sacred, water is life.”

Lynn Powell-Macklin, an East County organizer with the Bernie Sanders Brigade, told ECM, “We are working very closely with local Native American tribes, who are communicating with the tribes in camp, and asking what we can do to help, the water protectors in North Dakota.”

The Brigade has supported relief efforts in North Dakota, where representatives of over 300 tribes have gathered for months to oppose construction of the pipeline due to concerns that a burst pipeline would contaminate drinking water,  as well as objections to desecration of sacred sites.

Peaceful water protestors in North Dakota have been subjected to brutal treatment by police including water cannons,  rubber bullets and other aggressive actions that injured numerous protesters there.  The action drew thousands of veterans to the site, who volunteered to serve as human shields to protect the  Native Americans.

One day after the vigils, the Obama administration announced that it reroute the pipeline and not grant an easement for the section of pipeline that tribes fear would pollute their waterways.  The Army Corps of Engineers announced it will evaluate alternative routes including an environmental impact statement. 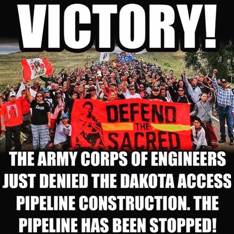 Tribes hailed the victory, though it could prove short-lived if the incoming Trump administration seeks to reverse the decision.

Trump will fix it and the EPA with his new appointments. Sanity may yet return to the U.S.A.