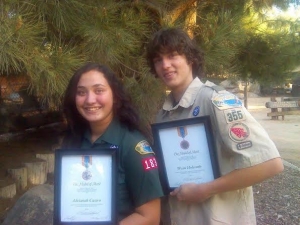 June 24, 2014 (San Diego's East County)-- Four Boy Scouts  from East County are being honored with the Medal of Merit for saving  a woman's life. On June 8th 2013, Sierra Holcomb, 21, Wyatt Holcomb,16, Adrianah Castro, 15, and Padraic French, 17, were attending a party at Shelter Island on June 8, 2013 when they heard someone yelling for help and to call 911. The four Scouts went to see if they could help and found a young woman lying next to her car unconscious, injured and bleeding.

A fisherman had found the woman, a victim of crime, and shouted for help. While other bystanders were only watching or taking pictures with their cell phones, the four scouts acted without hesitation, immediately rendered medical aid and called for EMS. San Diego Fire and Harbor Police arrived and relieved the Scouts, placed the victim in ambulance and took her to the hospital.

These four Scouts using skills learned in scouting demonstrated and performed notable acts of service in coming to the aid of a complete stranger. For this, The Boy Scouts of America has awarded each Scout with the Medal of Merit.

The Medal of Merit is one of the highest honors bestowed by the BSA for scouts that perform "some outstanding act of service of a rare or exceptional character that reflects an uncommon degree of concern for the well-being of others."

Sierra and Adrianah are Venture Crew members and Sierra is now also an advisor in El Cajon. Padraic is an Eagle Scout in Troop 355 in Spring Valley, where Wyatt is working to become an Eagle Scout.