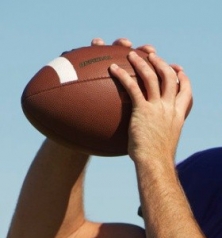 December 5, 2013 (San Diego’s East County) -- East County teams will be vying in the San Diego California Interscholastic Federation (CIF) football championships this weekend.   Monte Vista Monarchs will take the field Saturday at 3:30 p.m. against Sweetwater High’s Red Devils, followed by a 7 p.m. matchup between Christian High Patriots and the San Marcos Knights.  Below are previews of the games.

It has been nine years since the Monte Vista Monarchs have been to a CIF Championship final. Monte Vista’s winning percentage was.225 over the last eight years before Coach Ron Hamamoto took over the Head Coaching duties. All Hamamoto has done throughout his coaching career is win.

After defeating the La Jolla Vikings 41-24 last Friday, the Monarchs now have a rematch with the Sweetwater High Red Devils, which in the last meeting, Monte Vista prevailed 34-3. This time the stakes are higher for a division IV championship. Sweetwater has improved since their last meeting, and a win over Central last week 17-7. Monte Vista’s ground attack behind lead running back, Jermeil Jackson has been the winning formula offensively for this small group of underdogs. Jackson has amassed 1237 yards on 182 carries, for an average of 6.8 yards a carry, and 14 rushing touchdowns.

Another key to victory for the Monarchs is the small, but speedy defense, led by defensive back, D.J. Dosier who has 3 interceptions for 121 yards and a touchdown on the season. This rematch should be a fantastic one to watch. If you are looking for an economic, but eventful way to entertain this weekend, head out to Mesa College for a 3:30 kickoff on Saturday December 7, and look for the east county boys from Spring valley to take home the trophy 28-14.

This should be a close one on paper. Both squads have similar styles this should be a shootout, possibly a combined 80 points when all is said and done. The Christian High Patriots have scored an average of 45.3 points a game and the San Marcos Knights an average of 30.6 per game.

Typically the North County teams are favored in the CIF Championship games. A mentionable edge however, is the fact that Head Coach Jason Texler is very familiar with the Grossmont Conference. Texler coached the El Cajon Valley Braves for two years, and took them to a Division II title in which they lost to Oceanside in 2005 at Qualcomm stadium 31-21. Christian High is no stranger to CIF Championships, as the team won its last Division V title in 2011.

Christian standouts to watch include running back Paris Miller. Miller is the East County’s lead rusher with 977 yards, soon to be over 1,000, and averaging 122 rushing yards a game and 12 rushing touchdowns. Another standout is Miller’s partner in crime, gunslinger Michael Carrillo, 216 completions on 331 passing attempts, 31  touchdowns, and an astounding 1 interception on the season.

The Christian High Patriots should come out on top, although it will be a battle. Final score prediction: Christian High 42-28. This should be the top billing to end the season.