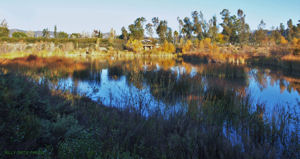 By Billy Ortiz
Photos and video by Billy Ortiz
December 21, 2011 (Lakeside) --  Early in the morning on December 10 at the Lakeside River Park Conservancy, students from El Capitan High School AP Environmental Science Group, Lakeside River Valley High School, and biology students from Cuyamaca Collage joined members from AmeriCorps NCCC  for a Lakeside Community Day event. The day’s goal was to teach students how to construct habitat for small wildlife that lives along this stretch of the San Diego River.

Habitat was constructed using large pieces of concrete to form a base, then smaller rocks collected in the immediate area were piled on top to create well-covered pockets for lizards, snakes, insects and other small creatures to live in. Other habitats were created with wood using the same principal, large pieces on the bottom and small on top. In roughly three hours, 11 AmeriCorps members and 23 student volunteers  constructed four new habitats at the River Park. The day was a success and all enjoyed snacks and refreshments after work was completed. 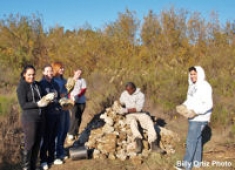 The mission of AmeriCorps NCCC is to strengthen communities and develop leaders through direct, team-based national and community service. In partnership with non-profits—secular and faith based, local municipalities, state governments, federal government, national or state parks, Indian Tribes and schools members complete service projects throughout the region they are assigned.
Drawn from the successful models of the Civilian Conservation Corps of the 1930s and the U.S. military, AmeriCorps NCCC is built on the belief that civic responsibility is an inherent duty of all citizens and that national service programs work effectively with local communities to address pressing needs.
For more AmeriCorps info and how you can join Click here http://www.americorps.gov/for_individuals/choose/nccc.asp 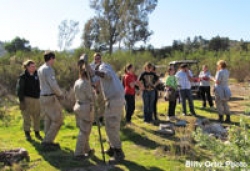 It was truly remarkable to watch these young men and women from all over the USA and our local community come together for this important project of biologically improving the environment and creating habitat for the small creatures that are so important to the eco system. For many years, the San Diego River has been marred by the sand mining industry, but now the natural beauty has been recreated by local communities and AmeriCorps NCCC.
The Lakeside River Park welcomes you to come and visit . For River Park info, visit  http://www.lakesideriverpark.org/