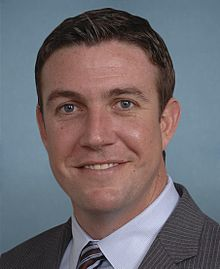 February 10, 2017 (El Cajon) – Across the nation,  members of Congress are drawing large overflow crowds at town hall meetings since the election of President Donald Trump, with many people voicing concerns over various policies.  But Congressman Duncan Hunter (R-Alpine) has refused  a request from constituents who presented a petition Tuesday with 500 signatures asking for a town hall meeting with their Congressman.

“We ask Hunter to act not as a Republican, but as an American,” says Tracy Clingan, one of Hunter’s constitutents who met with Hunter’s District Director Mike Harrison on Tuesday.  Clingan says only five people were allowed inside, though another 50 or so rallied on the street outside.  “We presented a petition with 500 names asking for an in-person town hall meeting so we could talk face-to-face with our representative.  Additionally, 40 pages of comments from constituents about why we want a meeting was presented.  We were very disappointed to hear that they couldn't schedule an in-person town hall meeting.”

According to Clingan,  the group asked Hunter to work to improve or fix the Affordable Healthcare Act, not replace it.  In addition, “ We asked Hunter to co-sponsor HR 724 to rescind and defund Trump's Muslim Ban.  We were told he would not. We asked that Hunter co-sponsor HR 804 to prevent political appointments from serving on the National Security Council.  We didn't get an answer at this meeting but a promise that he would be asked. We asked Hunter's position on San Diego being a sanctuary city and he does not support it. “

The constituents were part of a nationally effort called Indivisible to organize Americans with concerns about the Trump agenda.  Voters are encouraged to attend town hall meeting with their Congressional representatives or schedule one-on-one meetings with them. But so far, Hunter has dodged all efforts by Democrats and others with concerns about Trump’s agenda, deferring to staff.

The Los Angeles Times reports that Hunter aide Joe Kasper has said that their office has not had significantly more calls from within the district lately than  in the past, a claim activists question.  “I left a message at Joe Kasper’s DC office this afternoon challenging him to release call numbers from this time last year and explaining to him that whether or not Duncan has stuff to say to us, he has an obligation to listen to what we want to say to him,”says Christina Sosa, a member of  the East County Democratic Club.

Kasper told the Times that Hunter has held town halls in the past including phone-in town halls.  If so, live town halls have not been advertised in the press and progressives have complained of call screenings that prevented them from asking questions during the telephone town halls that were held.

Kasper accused constitutents of seeking a town hall “with the specific purpose of trying to create a public event which they can attend and agitate. We’re not going to adjust the way we do things just because there is a group out there looking to make a scene.”

Those seeking a town hall open to the general public, not merely conservative supporters of Hunter,  hope to ramp up the pressure by holding weekly rallies and requesting weekly rallies with their Congressional member, using tactics similar to the Tea Party’s in the past to build awareness for concerns over Congressional and presidential actions—and work toward change.

View map with zoom-in feature to locate the office :http://ecdcweb.net/congressional-districts/

Find more information on the Facebook page for the local Indivisible group at https://www.facebook.com/groups/237050563408404/.

Most are members of a local Democratic Club or long-time readers thatI know personally.. There is ZERO evidence that any of the people at this rally were paid. Unless you have proof of that, don't repeat this false claim.

East County is not Berkeley (where incidentally the rioters were later found to be an outside group, not Berkeley students.)

There were people who claimed all the Tea Party activists were paid by the Kochs brothers and that wasn't true either; while the Kochs paid for some ads etc. the average rank and file Tea Party members never got a dime, just as the local folks protesting against Hunter are not paid.

Calling peaceful protesters  "rioters" is defamatory which we do not allow on our site. It's okay to refer to rioters where a riot actually occurred,  but not in this instance. Please show those with whom you disagree the same respect and courtesy you would wish to be acccorded to those who protested against Obama.

Should be a good turnout for the riots as all the Republicans and legal immigrants will be at work.