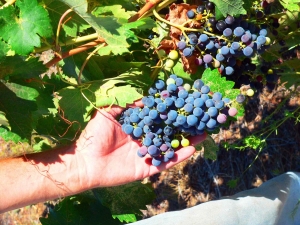 San Diego County has over 40 wineries, nearly all in the eastern regions. Bernardo Winery in Rancho Bernardo is the County's oldest; Orfila in San Pasqual has won more than 1,000 awards. But now some East County winemakers are producing vintages gaining attention of wine connoisseurs--winning awards and savoring the fruits of their labors. 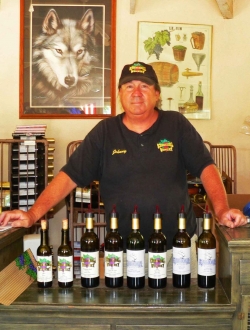 “I wanted to put Ramona on the map,” said Johnny Schwaesdall, proudly displaying two gold medals won by Schwaesdall Winery and its related label, Ramona Winery at last month’s competition in Temecula. “When we first came in there were all these big wineries and we didn’t think we had a chance…There are only 29 gold medals given out, and Ramona wineries got three. We got 10% of the golds—so we made history.”

A former roofing contractor, Schwaesdall (photo, right)  bought property in Ramona with 50-year-old grapevines and grafted old world grapes onto the vines. He started out making wines in a cellar with his father. Last year, he won a bronze medal in Temecula’ competition, before winning gold this year for cabernet sauvignon and a merlot. He serves up samples in a winetasting room with straw bale walls and an outdoor seating area.

Three years ago, Ramona received a federal appellation as a wine-growing region with conditions similar to the French Bordeaux region. Now an increasing number of Mom and Pop vineyards and wineries are cropping up. Some, like Schwaesdall, have tasting rooms open to the public. But opening a tasting room is a costly process – up to a quarter of a million dollars in San Diego County.

Some do tastings only by appointment; others have no tasting rooms but wholesale their wines to local restaurants and stores. Many sell wines direct to consumers on their websites. Some vineyard owners don’t make wines, instead providing grapes to nearby wineries. 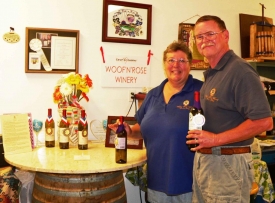 Stephen and Marilyn Kahle (photo, left) have been growing grapes at their Woof n’ Rose Vineyard in Ramona, named after their fondness for raising dogs and roses. Now, they’ve taken the next step and begun making their own wines. They’ve won several medals in local competitions and next year hope to enter a larger competition in Orange County. Unusual varieties include Cactus Rose Red (with tempranillo and Grenache), Grenache Noir, and Eglantine (a blend of merlot, cabernet sauvignon and cabernet franc).

“The climate here is very much a French Rhone style—hot days and cool nights are very good for red grapes,” said Stephen Kahle, who says he received a lot of help from other local winemakers. “Anything that helps us, helps them,” he said. The couple ages wines in French and American oak barrels as well as some stainless steel. Their wines are sold at Country Cellars in Wynola, Café Merlot in Rancho Bernardo, San Diego Wines & Culinary Center downtown, and at a Washington D.C. restaurant.

Like many winemakers here, they cite the high cost of a major use permit as a major barrier to opening a tasting room, noting that other winemaking regions make it easier and less costly for aspiring vintners to attract tourists and contribute to the region’s tax base. The County has taken steps to allow administrative permits in some instances, but the process is still time-consuming and too costly for many small wineries to afford, Kahle said.

“The wine industry would bring a lot to the County,” he noted. “Other areas have dumped billions into their wine areas to boost tourism.”  Some backcountry residents have been wary of tasting rooms springing up all over, voicing concern over tipsy drivers on windy mountain roads.  But other area residents are savoring the burgeoning number of winetasting opportunities--and eagerly seeking out more.

Ramona isn’t the only East County community gaining a reputation for its winemaking. 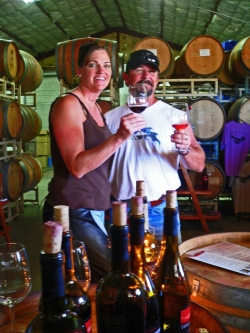 At the higher elevations of Warner Springs, Hawk Watch and La Serenissima  are among the vintners gaining recognition for their wines.

Hawk Watch, named for the birds of prey often seen on the premises, recently picked up a silver medal for its 2006 Synthesis (a syrah/zinfandel beldn), as well as bronze medals for a syrah and meritage. They’ve also earned a silver medal for an orange muscat from Taster’s Guild.

“We’re one of only two wineries in Southern California with a dry orange muscat,” said Lisa Schnell, who owns the winery along with her husband, Mike. Planting vines in the granite side of a mountain took some effort. “Basically we were digging through concrete, but the grapes find a way, and there are lots of minerals in the soil,” Lisa said. Mike took classes online through the University of California, Davis and later gained hands-on experience with Leonnese Cellars in Temecula.

Ray Wilson of Julian and Jody McBride from Alpine (photo, above right) were in the tasting room when we stopped by to visit. “I consider myself a wine snob,” said McBride. “They have the best all-around wines—the reds, whites and sweets.” Hawk Watch wines are sold at Country Sellers as well as through the winery’s website and wine club 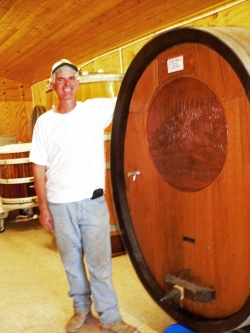 Down the road, La Serenissima Winery in Warner Springs has a full ten acres planted in front plus some experimental crops out back on the 22-acre property. “We are probably one of the largest in the County in terms of estate grapes,” said Anthony Tiso (photo, left). “It takes a lot of work, but it’s worth it for us.”

At La Serenissima, founded by John Tiso and family, grapes are grown in rocky terrain under conditions “as natural as possible.” Surprisingly, the vines are dry-farmed, receiving no water for several months each year. Temperanillo (a Spanish grape harvested early in the season), merlot, cabernet sauvignon, cabernet franc and syrah are among the varietals grown here, along with areneis, an Italian white wine grape.

“My marketing angle is buy local, buy fresh,” Anthony Tiso told us. “Why make some guy in Australia rich?” Originally from Venice, the Tisos have constructed a Venetian-style villa where they host private tasting parties at harvest time, though this winery is not open to the public.

East County Magazine did, however, savor a private tour of the winery, starting with a room where white wines are cold fermented in stainless steel tanks. Grapes are augered and spun to separate out the stems. 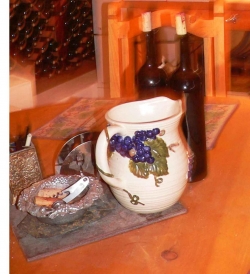 “We always pick and crush the same day for our reds,” the winemaker explained, stepping up to a massive oak barrel that stores 1,000 gallons of wine. Next, we descended to a cellar where a private tasting room has been built, patterned after the European tradition (photo, left).

The winemaker poured vintages aged in French, American and Hungarian oak barrels, demonstrating subtle differences in flavors. “Fining is the real secret,” he added. “It’s the last phase of clarification, catching the last of the impurities.” He uses a secret formula that includes egg whites, “the way it’s been done for hundreds of years.” Large wineries use machines and chemicals instead.

La Serenissima wines are unfiltered, estate grown, using natural and sustainable agricultural practices, and crafted with traditional Italian methods. “We tend to age our wines longer, one to two years or more in oak,” Tiso added.

Every vine on the property is a clone from rootstock created at U.C. Davis. “You can’t go to France and export rootstock; most likely they would die,” he explained. “What they’ve done in the wine industry in California is grow rootstock and graft onto it whatever you want to buy—there are nurseries with hundreds of cabernets, dozens of syrahs.” Altitude and climate conditions in the mountain region are best suited for reds, with conditions similar to Sardinia, he noted.

La Serenissima wines have won awards in San Diego, San Francisco and Temecula wine competitions. But Tiso concluded, “Our emphasis is on making fine wine. It’s quality, not quantity that is most important.”

Even East County's high desert regions are gaining ground as wine-producing areas.  In Campo, Gloriosa Vineyards is gaining a reputation for full-bodied red wines including syrahs, cabernets and zinfandels.  The dry climate is ideal for growing varietals normally prone to fungus.  Gloriosa's wines are sold in many localities ranging from the Mt. Laguna Lodge to Albertson's in Alpine.

Rock Canyon Vineyard, another boutique winery best known for its old-vine cabernet sauvignon, also produces syrah, sangiovese and zinfandel grapes.  Rock Canyon wines are now sold in many locations throughout San Diego County as well as at the Temecula House of Wines and at their website.