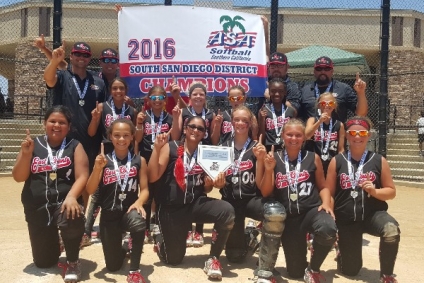 The 10u team will travel to Medford, Oregon for a week during the first week of August. The 14u team travels to La Habra, California the last week in July.

The 10 and 10u team, who came together on May 1, hasn't been successful in the last five or six years.  But this year, under manager Manny Sandoval, they're boasting an incredible 33 wins, six losses and one tie.

East County ASA is located in El Cajon in the Granite Hills High School neighborhood.  Its athletes have moved on to play at the high school and college levels.

If you want to help the team fundraise and help families afford to go on the trip, they have started a GoFundMe at https://www.gofundme.com/eastco10unationals.

They will also be at Cajon Classic Cruises on Main Street in El Cajon tomorrow from 5-8 p.m. fundraising.  The girls will be in their All-Star jerseys.