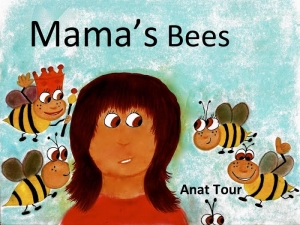 San Diego’s East County resident Anat Tour, is at it again, with her latest book offering, Mama’s Bees. This prolific writer has penned her 6th children’s book, since we initially met while I was moderating an Author Event at Barnes & Noble Grossmont bookstore in La Mesa, and she asked me for some advice on how to get started. A few weeks later Tour had published as an eBook, Mama’s Shoes. The interesting thing about Mama’s Bees, as told to me in a phone interview with Tour, is that it is actually inspired by a true story. 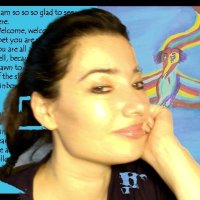 The author, a high school math teacher at Mar Vista in San Diego, a former international model, and a singer, as well as a wife and mother of four, somehow finds the time to write these captivating children’s stories. Thus, a Renaissance Woman. As a matter of fact, Tour has indicated to me that her children have actually contributed towards her stories, such as in Rainbow Animals, they had speaking and singing roles in this eBook/CD compilation. They also had a role in Mama’s Bees, just as they had in Tour’s first book, Mama’s Shoes. You can actually call what she does a family affair. I get the feeling from my many conversations with the author that her children are her prime motivation behind her writing.

Tour tells me in a phone interview that a swarm of bees descended on her home in East County, and because she has a phobia about bees as well as I and many others, she ran into the house. There is actually a comical aspect to this background to her book, which comes out in this book that she has written. Not realizing that these bees that had swarmed her back yard were honey bees, and thus harmless, the author called a bee expert to have them removed from her back yard. To turn this incident into Mama’s Bees, is reminiscent to how she involved her children in Rainbow Animals. 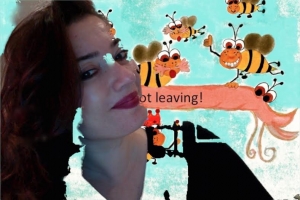 Mama’s Bees is a book that should be read by parents to their young children for all to get full enjoyment of it. Tour includes in this book a rich color scheme which is typical of her previous books. Just like Monet’s paintings being instantly recognized as his work of art, one can easily recognize Tour’s work from her previous writings. She explained to me that she does her own artwork and uses soft pastels and artist’s markers, as she feels that they are cleaner and easier to use than oil pastels, which she has graduated from.

Typical of this warm and delightful story by the author is actually how it begins, as Tour states: “On a sunny day, a cloudless day … Mama and I were in the garden watering the flowers. All of a sudden, a big cloud appeared in the sky. That spiraled and twisted down … “ This was the swarm of bees that inspired this story. In all actuality when this happened to Tour she felt compelled to call a “bee rescuer” due to her phobia about bees, but when the bee rescuer came to her home he informed her that these were harmless bees, and as a matter of fact, honey bees that would provide honey. There was actually a good ending to this incident at her home, as once the bee rescuer removed the bees from her backyard he would return several months later with bottles of honey from the same bees that caused her a bit of consternation.

Told in her warm and intuitive way, this master story teller has written another book in her long line of stories that I anticipate will become a trademark of her writing career. Mama’s Bees is a book that I would recommend to all parents that have young children for them to read and enjoy together, especially with the Christmas and holiday season coming up. To put this book and Tour’s writings in perspective, and to get some insight into her thinking, the embed podcast interview of her at the “East County Magazine Live!” radio studio should be listened to here.

Dennis Moore is an Associate Editor with the East County Magazine in San Diego and the book review editor for SDWriteway, an online newsletter for writers in San Diego that has partnered with the East County Magazine, as well as a freelance contributor to EURweb based out of Los Angeles. Mr. Moore can be contacted at contractsagency@gmail.com or you can follow him on Twitter at: @DennisMoore8.