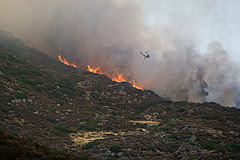 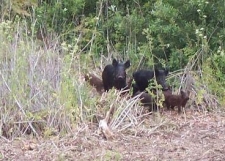 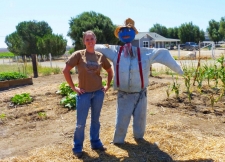 September 29, 2010 (San Diego’s East County) -- A Mexican fire that threatened the border area between Castle Rock and Bell Valley over the weekend was turned back handily at the border fence Sunday night by a line of firefighters armed with a variety of ignition devices.

Our family had a perfect view of the operation from our back deck. We had been keeping an eye on the fire since the previous day, when it sprang to life somewhere south of Castle Rock in Campo. The east to west moving fire crossed the border briefly, not far from the railroad tunnel between Campo and Tecate, which prompted the immediate arrival of the cavalry, in the form of tanker planes, helicopters and ground engines.

We had dinner on the deck that evening, and as darkness fell, we saw the long line of flame advance over the tops of the first hills south of the fence and begin to drop down toward the fence and road. As the flames came north, a line of headlights—fire engines, bulldozers and CDF ground crews—trundled up the border road and took positions along the base of the fence.

When we first heard what sounded like gunshots, we thought the smugglers on the Mexican side were shooting at the firefighters, which they do sometimes in our neck of the woods, but on closer inspection, we saw red and white balls of fire arcing high into the air to get over the 18-foot-tall fence and onto the Mexican side. The strategy, carried out with near-military precision, was to burn out the brush nearest the fence before the main force of the fire could reach it and breach the border.

The strategy worked like a charm, protecting numerous homes and outbuildings between the border fence and Highway 94. Within a couple of hours, the stretch of border that we could see began to go dark, as the fire simply died of starvation. Overall, the northern fire front was a four-mile line along the border.

I later learned from Cal Fire R.A. Battalion Chief Pete Scully that the portion of the fire that was driven by the wind toward Tecate had prompted authorities on the Mexican side to request assistance from its U.S. counterparts. He said Cal Fire sent five engines down and U.S. Forest Service sent another five. The fire was stopped within a mile and a half of Tecate, B.C. Between both sides of the border, a total of 15 engines came to the fire. U.S. and Mexican authorities have a long-standing operating plan for cooperative firefighting along the border.

The border road crews used three different kinds of ignition devices, according to Scully. One is a modified starter pistol that fires “hotshot flares.” It makes a red fireball that you can clearly see traveling through the air. The “Fat Boy” makes a white fireball, quite a bit bigger than that of the pistol, and is also clearly visible. The Fat Boy is similar to some commercial fireworks in the way it is launched. The third type used on this operation is called a Big Shot and sprays a shower of sparks above and around it after being thrown to its target by hand.

I had heard from fire authorities some years back that the border fence and road had the potential to be a fire break for fires coming up from the south, so I was curious about whether it had worked out that way. Scully said it has, though it is sometimes a two-edged sword, as it is no longer a simple matter to send a crew or dozer across to deal with a trouble spot—and lobbing fireballs over it is a challenge. On the other hand, a partial barrier combined with a broad strip of cleared dirt does a fine job of slowing or halting a brush-driven blaze. “Overall, it’s a good thing,” he said.

Wild pigs in the backcountry?

The U.S. Forest Service is getting worried about wild pig impacts to oak woodlands and riparian habitats—enough so that Cleveland National Forest Supervisor William Metz sent a letter to the Descanso Planning Group and other members of its mailing list to request community input on how best to get them under control and protect local properties and habitat.

“We think it’s pretty significant because of the riparian lands,” said USFS spokesman Brian Harris. Harris added that they are most noticeable in late summer and fall when they tend to congregate in places where water can be found. Damage includes trampled and polluted watercourses, destruction of seedling oaks and competition with native species for scarce food resources.

Harris said the pigs are not true wild pigs, but are actually the descendents of domesticated stock that has bred and become feral. The input sought from the public is intended to garner ideas for how the problem should be dealt with—a process Harris called an “informal scoping.” If a project is proposed later, a formal scoping process will be started. Comments may be addressed to Pete Gomben, Environmental Coordinator, 10845 Rancho Bernardo Rd., Suite 200, San Diego, CA 92127, or emailed to pgomben@fs.fed.us.

Pigs can be legally hunted, according to California Fish and Game biologist Kevin Brennan: “anyone with a California hunting license can get a pig tag,” he said. A pig tag is $19.95 and there is no limit on how many tags may be issued per hunter. 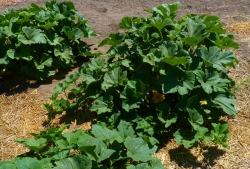 The Potrero Community Garden is celebrating its first year of operations with a big fat party for backcountry residents of all ages on Oct. 2 at the Old West town set at the intersection of Potrero Valley Rd. and Potrero Park Rd..

The group is partnering with Potrero-Tecate Disaster Defense Team, who will provide food service, and entertainment will include a horseshoe tournament with a cash prize, live music and Gaskill Brothers performances.

If that’s not enough action for you, you can also vote in a local election at this event, providing you are a resident of Potrero. The Potrero Volunteer Fire Department will hold its annual election for board members there. Write-in applicants will be accepted until 10 a.m.; voting will be done from noon to 3 p.m., and results will be announced at 3:30 p.m. Learn more from Gordon Hammers, 478-5000.

For more information on the Potrero Community Garden, call Katrina Spirz at 942-2008.

Billie Jo Jannen is a property owner and resident of Campo for 21 years and has written and edited rural news for 22 years. Her children and grandchildren also live in Campo. Reach her via email at jannen@inbox.com.

I have lived "up here" 10 years and never heard of"...smugglers on the Mexican side were shooting at the firefighters, which they do sometimes in our neck of the woods.." Maybe Billie Jo could advise us of her source for this ? news.

she's a veteran news editor in the backcountry for years before launching this column, and ranks high on crediblity through the years.