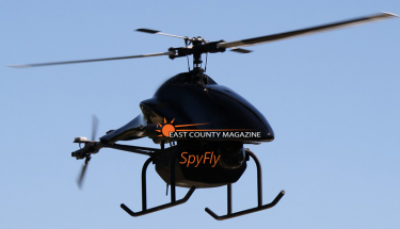 April 1, 2013 (San Diego’s East County)  -- There’s a new reporter on the beat over East County’s skies. Thanks to a generous bequest from an anonymous donor, East County Magazine announces acquisition of a surveillance drone.  Our publication joins a growing number of journalism organizations that seek to deploy drones, as U.S. News recently reported.

In the past, ECM has had to rely on hikers and bystanders to secure videos proving that SDG&E violated no-fly zones around eagle nests in rocky terrain and that the utility later dropped a 16,000 pound hunk of a high voltage tower in the desert.  But sometimes getting the goods on corporate wrongdoing can put photojournalists at risk.

“The recent violent threats against ECM photographers by a construction manager at the Ocotillo wind facility necessitated a restraining order and made clear that our community journalism organization needed some high-tech help,” said editor Miriam Raftery.  “Now we can get proof of corporate wrong-doing  while protecting photojournalists from risks to their personal safety—also assuring that our First Amendment freedom of the press to gather news is not infringed.”

The Cajon Drone is born.  Based at Gillespie Field in El Cajon, the Cajon Drone will be ECM’s eye in the sky, hovering close to major energy projects and other developments to document evidence  of illegal practices and safety violations from a birds-eye view. 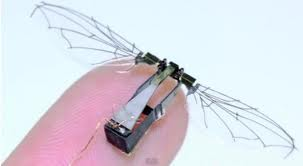 While the drone is intended principally for surveillance, a tactical strike may be deployed if needed to obliterate threats and protect ECM personnel in the event of an attack.

ECM's legal counsel noted that privacy objections in this case are outweighed by security needs and First Amendment freedom of the press -- as well as your right to know what's happening in East County.

Asked to confirm a rumor that ECM plans to supplement its aerial spy drone with a  fly-on-the-wall miniature drone to listen in on officials’ and executives’ conversations in public places, ECM’s editor declined to comment.