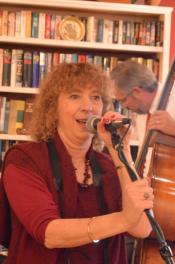 Each election, SD Rostra/Flash Report’s Barry Jantz holds a contest to see who can predict the most local election outcomes based on questions he dream up.  The winner (me!) successfully nailed eight of ten questions, plus three tie-breakers.

The prize?  Free entry to the next “Albondigas” luncheon for political movers and shakers in East County.  I look forward to savoring my winnings. Hmm...maybe I should try my luck at predicting horseracing next....

Entrants were encouraged to “put on your thinking cap” and take a stab at guesstimating not only winners in key races from school board to Congress, but even the point spread in the San Diego mayoral contest.

The announcement of winners was delayed until all votes were counted and tie-breaking questions calculated, six weeks after Election Day.

“That’s my story and I’m sticking to it,” Jantz posted on SD Rostra/Flash Report, a political blog that attracts primarily the “center right” including moderate Republicans and right-leaning Libertarians, according to the site’s description. The contest is open to everyone and this year, 40 people tried their luck at picking winners and losers.

The National Albondigas Political Society, which started in San Diego County and is said to be named after a meatball soup, is open to all political persuasions.

I'm either a very lucky guesser or could have a new gig as political pundit someday, ha! Truthfully though I'd interviewed most of those candidates, so had some insights into the characters and strengths/weaknesses of their campaigns...though it's always tough to know what voters will do.