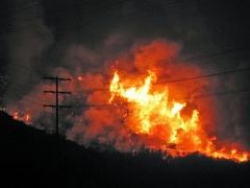 April 5, 2012 (San Diego’s East County)--When ENRON schemed to manipulate markets and defraud ratepayers, its executives went to jail. BP faces billions of dolalrs in fines for causing the Gulf Oil spill.  When automobile manufacturers sold cars with dangerous defects that killed people, it was their shareholders who paid the price. A lost hunter convicted of accidentally starting the Cedar Fire with a flare gun also spent time in jail.

Why, then, should SDG&E and its publicly traded parent company, Sempra Energy, expect local ratepayers to pay for its uninsured liability costs for the wildfires that it caused, while its executives get off scott free?

Sempra is a highly profitable company.  In 2011, its NET income was $1.35 BILLION, San Diego Business Journal reported.  Its shareholders can and should be asked to absorb the costs of SDG&E’s negligent actions.

The 2007 wildfires caused half a million people to evacuate their homes. Half a million acres burned.  1,500 homes were destroyed—and nine people died.  Three of those fires were started by SDG&E’s improperly maintained lines, the CPUC determined.

This isn’t the first time.  A records search shortly after those fires found 166 fires that SDG&E admitted its lines caused in five and a half years.   Many of our readers have complained of sagging, dangerous lines that to this day are not repaired and tree limbs resting on the lines. Clearly this company needs some incentive to make its lines safer.

New energy projects proposed will also put people in harm’s way. Some appear reckless –a wind farm proposed in Ocotillo virtually atop a major earthquake fault, dangerously close to homes.  A gas-fired power plant in a brushy area near Santee in the path of the Cedar Fire. Wind turbines 450-feet-tall proposed less than 455 feet from a popular road in McCain Valley—when there are hundreds of cases where turbines lost blades—and pieces flew up to  a mile.

If the CPUC grants SDG&E’s request it will be enabling the utility – and the developers of other risky energy projects—to avoid the bother of making projects safe, since they can all just stick it to the ratepayers if their projects cause fires, injuries, or deaths.

Some of the ratepayers SDG&E wants to charge are fire survivors who lost homes and loved ones. Many more suffered property damage, burns, or had business losses.

Asking fire victims to pay SDG&E’s uninsured wildfire liability costs is akin to asking a rape victim to pay the legal bills for her assailant.  It’s not the fault of ratepayers that SDG&E caused these fires –or that it failed to carry adequate insurance for a catastrophe.

Just as ENRON, BP, Ford and other companies have been held liable for causing massive harm to ratepayers, property, human lives or the environment, so, too, should SDG&E be made to pay the price for its actions. The CPUC must uphold its duty to protect the public and hold SDG&E and its parent company, Sempra, responsible. Say “no” to this brazen scheme to rip off ratepayers and fire victims—and make Sempra’s shareholders cover the costs of the wildfires that it caused.