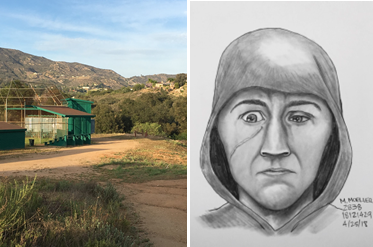 April 26, 2018 (Jamul) — ECM has new details on an attempted kidnapping of an 11-year-old girl walking between Oak Grove Middle School and Jamul Primary School on Tuesday.

The 6th grade student was using a dirt trail in the rural area frequented by other kids and even Oak Grove’s cross-country team. Near the bottom of the trail behind a baseball dugout, a man suddenly grabbed her backpack from behind, possibly in an attempt to knock her off her feet. She stood firm and then the suspect grabbed her arm tightly, so much so she described it as feeling like her arm was going to explode. She was able to escape and run towards the school.

Once she was far away, she looked back but did not see the suspect again. From the scuffle, she saw him wearing a baseball cap, dark hoodie, dark pants, and purple or maroon converse. She also noted he was tall and thin. From her description, the Sheriff’s Department released a sketch of the suspect.

From there, she headed to her destination— Sonshine Club, an after-school Christian program at JPS where she volunteers. She spoke with adults who took her to the school office where police were called. Sheriff’s deputies arrived at 3:49 p.m., about an hour after the incident took place.

From there, deputies interviewed her and took her back to the scene. They swabbed for DNA on her arm where she suffered a minor abrasion. Later, detectives from the Sheriff’s Rancho San Diego Substation arrived to gather more information. Investigators also found evidence of footprints in the dirt from the suspect.

Other boys who were walking along the trail were interviewed by police, but none had sighted the suspect, leading Diane Sitton, who serves at Sonshine Club as the Elementary Children’s Director at Jamul Community Church, to guess he was likely lying in wait for a victim behind bushes lining the trail. (Full disclosure: Sitton is the writer’s mother, and provided many details for this report because she stayed with the victim until she left the school with her family later that night)

Detectives are also looking into a truck which was reported stolen from school property around the same time of the incident. It is unclear if the two events are connected.

Sheriffs are keeping up a patrol on the dirt path and around the schools at least until the end of the week while they conduct their investigation. 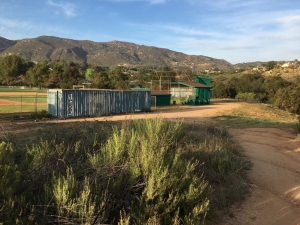 In response, the Jamul-Dulzura School District is making sure more adults are visible during dismissal, according to a letter from superintendent Nadine Bennett. She also urged parents to have their children walk in groups to and from school.

This man frequents valley center, Escondido area also. His megans law description doesn't say he is cross eyed with large facial scars from accident. His names Daniel Woods. Probly with his family if not on parole for sexual crimes against women and kids.
It seems unethical to share information the child shared privately with her daycare teacher.

in our report.  The description she gave the daycare worker was also provided to the Sheriff and media, as was the fact that he grabbed her. Other than the comment that her arm felt like it would exploded (showing this was clearly an abusive grab, not someone just trying to, say, get attention to ask directions) I don't see the issue here.

We have photos of the scene and since it is near a ball field felt it very important to alert the community to protet other childen who may take this same route or play ball at that field.

Should be incarcerated FOREVER! I'm guessing this guy has done this before (by how well his actions seemed to be planned - as if he was stalking her, or other children), maybe even arrested and locked up in the past. If the description is accurate (I see what appears to be a facial scar on his face), then hopefully he will get caught soon. We need judges who are willing to exact the harshest punishments allowed by law on ALL criminals - especially sex offenders, and in particular those who prey on innocent children! The laws need to change as well, and be much harsher. These sub humans need to suffer much worse than the victims, who will carry emotional scars for the rest of their lives..