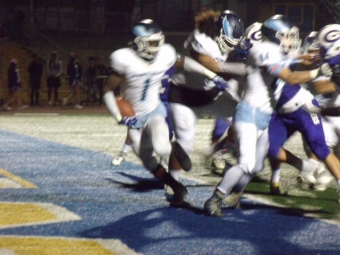 October 5, 2018 (El Cajon) - After a much-needed week off, ECM Friday Night Lights is back for week seven of high school football.  This week, we come to you from Grossmont High School, where the Foothillers sport a record that’s a little out of character--2-4--but have gotten a good head start in Grossmont League play, winning 51-7 over Valhalla last week.  Tonight they host the Eagles of Granite Hills, who walk onto Lt. Thomas M. Adams Field undefeated with a 6-0 record amd look to stay that way. 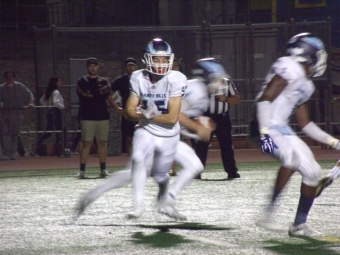 It was the battle of the eights—jersey numbers, that is--Cristopher Ostreng vs. Jamie Odom.  In the end, the Granite Hills senior quarterback Ostreng had the last laugh after he completed a long pass to junior Carlos Deleon that put the Eagles in goal line position in the first quarter.  Ostreng finished the job himself with a zip line run into the end zone to give the Eagles the first lead of the game at 7-0.  Ostreng decided to run it in himself again from 20 yards out at the end of the first to give the Eagles a 14-0 lead after one. But wait!  Ostreng wasn’t done yet!  At the buzzer, he hit junior Richard Harris in the end zone for the touchdown and the real score after one was 21-0 Granite Hills. 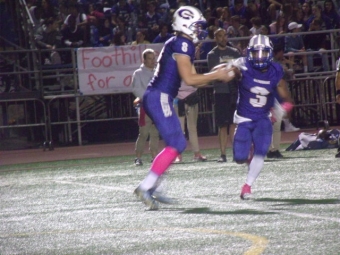 The Eagles eased off the gas in the second quarter and Grossmont made them pay with the senior quarterback Odom’s pass to junior Skip Waltower who ran it down for the touchdown to get the Foothillers on the board.  But Granite Hills pulled away again with Harris’ second touchdown of the night.  The extra point was blocked, but it didn’t matter; the Eagles led big, 27-7.  Odom was understandably annoyed and hurried the Foothiller offense downfield on their next drive, eventually running it in himself for the score.  Grossmont’s extra point was blocked too and the Eagles led 27-13.  Senior kicker Justin McElligott tacked on three before the half was out and the Eagles went to the locker room up 30-13. 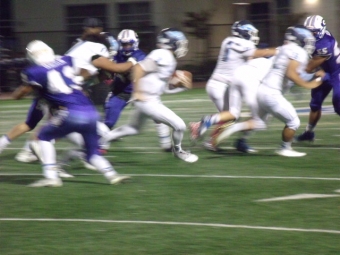 Ostreng was itching for the second half to start and he showed us why in the third when he dove into the end zone for his hat trick touchdown to make the score 37-13 Granite Hills.  But Odom thinks with his arms and not his feet as he aired it to fellow senior Des Carter for the touchdown and Grossmont quietly kept up, trailing 37-20 after three.

Granite Hills kept pounding in the fourth with Ostreng’s touchdown pass to junior Jacob Setterberg for the sixth Eagle touchdown of the night to keep the blue and navy unblemished, giving them a 44-20 win and moving them to 7-0 and 2-0 in league.  The Foothillers fall to 2-5 and 1-1 in league. 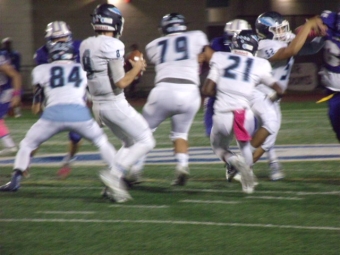 The Hillers travel to La Mesa for that age-old rivalry clash with Helix at 7:00 p.m. next Friday.  The Eagles bring their unbeaten streak to El Capitan next week for a 7:00 start. 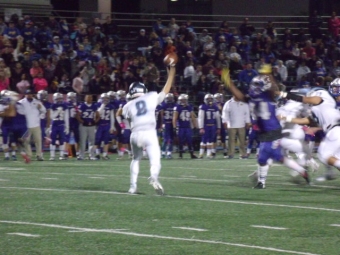 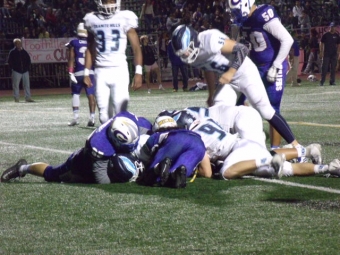 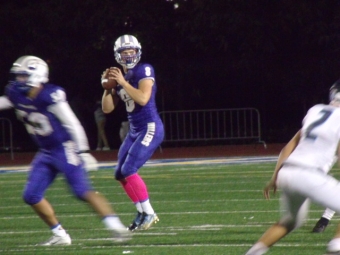