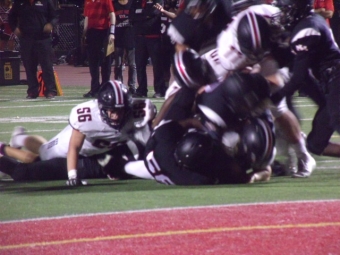 September 7, 2018 (Spring Valley) - For week four, ECM Friday Night Lights kept it in Spring Valley for a non-division matchup between the Santa Fe Christian Eagles, who made the hour-long trek southeast from Solana Beach and the Matadors of Mount Miguel, who come into week four with their better-than-usual 1-2 record. 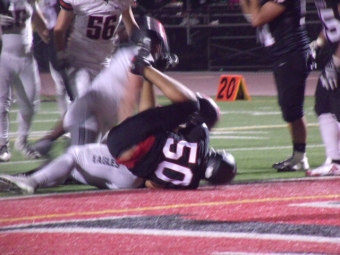 We arrived at the Mount just in time for an Eagles touchdown; senior Jack Miles ran it in for the score to give the Eagles the lead in the first.  A play later, senior back Will Littlejohn dove in for the second Eagles score to go up 14-0 after one.

All kinds of things happened in the first three minutes of the second quarter.  Junior Eagles quarterback Kian Hogan broke some tackles for a nice touchdown run up the middle for 21 yards.  The Matadors finally got on the board in a big way with sophomore quarterback Jacob Laverdiere’s screen pass to senior Eric Graham, who took it all the way downfield 80 yards for a touchdown.  The extra point was no good and the Matadors settled with six.  But Littlejohn ran through at the goal line for his second rushing touchdown of the night to keep upping the SFC lead.  Laverdiere and the Matadors hung tough; the sophomore aired it to Jakeem Allen, who took it to the house for the score, but another extra point was blocked.  The Matadors defense stepped up and managed to stop another SFC drive, Eagles senior Jack Bosman’s 39-yard field goal attempt was no good and we ended the first half with the Eagles leading 28-12. 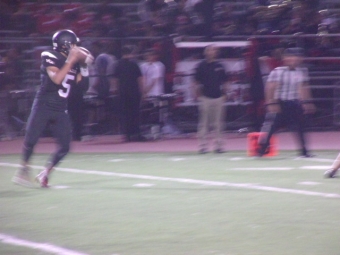 An action-packed but scoreless third quarter passed until the end when Miles punched it in at the goal line for his second rushing touchdown to make it 35-12 Eagles.

The fourth quarter started with a bang as Santa Fe Christian junior linebacker Cade Ellis recovered a fumble at the goal line, paving the way for the offense.  Littlejohn took the pitch and scored his hat trick touchdown, all within the first minute of the fourth. The Matadors were able to get downfield quickly thanks to a long pass to Allen and Laverdiere punched it in from the four for a Matador touchdown.  Senior Larry Yzaguirre took the rock and broke some tackles for the score to bring Mount Miguel closer.  The Matadors got within 10 as Laverdiere aired it to Allen with three minutes left, but the Eagles killed the clock and came away with the 42-32 win.  Mount Miguel falls to 1-3. 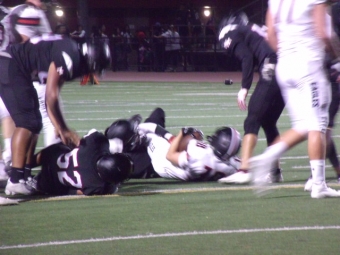 Mount Miguel stays at home next week and keeps it non-conference as they host Imperial at 7:00 p.m. 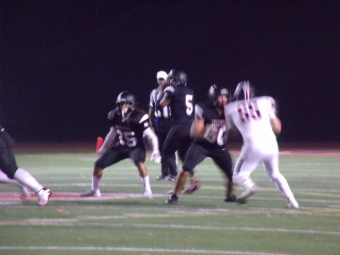