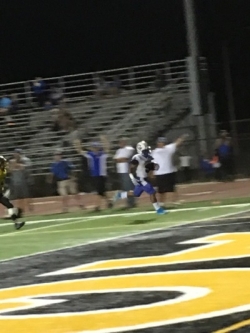 Does your son or daughter play a sport at a level other than varsity? Comment on this story or tweet @ECMagSports to request coverage!

October 6, 2017 (Lakeside) - ECM Friday Night Lights is back after a two-week hiatus with our first-ever trip to Lakeside as the Foothillers of Grossmont (3-2 overall) made the trip out to visit the Vaqueros of El Capitan (2-3 overall) in both teams’ first matchup of Grossmont League play. 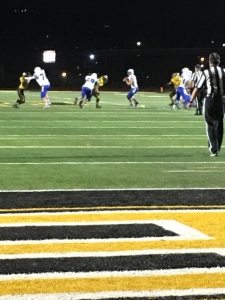 An early fumble at the one yard line by senior wide receiver Star Iuli in the first was costly for the Vaqueros, as the Foothillers marched downfield with some great passing and sophomore quarterback Jamie Odom punched it in for a 7-0 Hillers lead at the end of one.

But in the second, the Hillers did a little shooting in the foot themselves.  They were about to punt it away after a miserable, penalty and incompletion-ridden drive when the punt was blocked and recovered by the Vaqueros at the 17 yard line. Iuli, the king of making things happen, made his way to the end zone to make the catch on senior Antonio Olivieri’s short pass on the second play of a two-play drive and the Vaqueros were back in it, tying the game after a horrible start.  Yet another special teams mistake turned out to be costly, this time for the Vaqueros, as Grossmont picked up a safety to get out in front again.  Things got worse for El Cap.  On the last play of the half, Olivieri’s pass was intercepted by Grossmont’s senior defensive back Andrew Lira and taken back for a pick six and the Foothillers had a comfy 16-7 lead at the half. 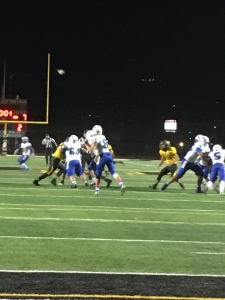 Grossmont added on in the third.  After a big catch by senior wide out Josh Moala that put the Hillers at the one, senior running back Shevell Sterling Jr. put it in for the score. The Foothillers led 23-7 after three.

Sterling sniffed out the end zone again to kick off the fourth.  A few minutes later, Odom went deep to find the junior Desmond Carter for a nice catch and score.  Sterling ran in his hat trick touchdown, Grossmont added another on a pass to junior Conner Sanchez and this one was too far out of reach for El Cap.  The Vaqueros fall 51-7 and suffer a loss to start Grossmont League play and fall to 2-4 overall.  The Foothillers start league play 1-0 and move to 4-2 overall.

Next week, the Foothillers visit neighboring El Cajon for a rivalry game against Valhalla.  Kickoff is at 7:00 p.m.  As for the Vaqueros, they come inland too to pay a visit to Helix.  Kickoff for that game is at 6:00 p.m. 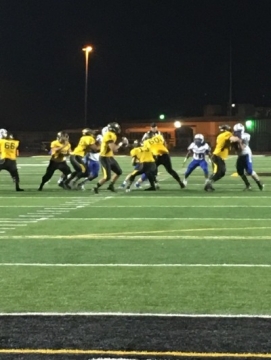 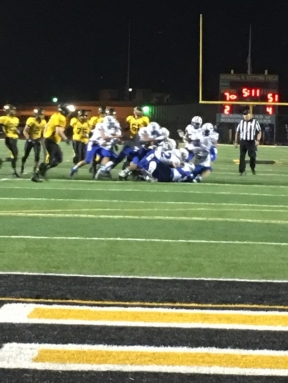