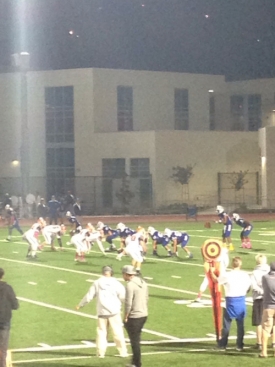 As usual, the Hillers wasted no time.  With 4:39 left in the first, James Mackey finished the job after a march downfield and it was 7-0 Grossmont after the extra point.

In the second, Valhalla finally held onto the ball in the red zone and scored on a Jerome Johnson.  The PAT was no good and it was 7-6 Grossmont.  The Foothillers weren't afraid.  Hunter Gaines found Zach Jones wide open in the end zone.  He made the catch and the PAT was good and Grossmont led 14-6 at the half.

In the second half, the Foothillers got right back to work on the first drive of the half.  They marched downfield and Kenyon Johnson ran in and it was 21-6 Grossmont after the PAT.  With a minute left, Gaines found Dominic Guevara for another touchdown and the score was becoming another blowout, 27-6 Grossmont. 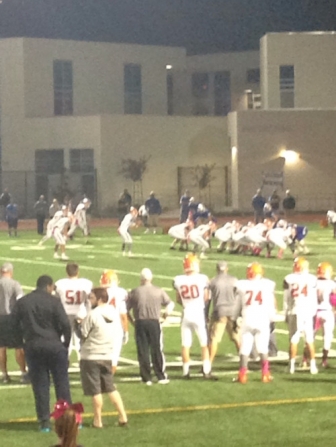 In the fourth, The Norsemen reached double digits when Brandon Fuller took the handoff and ran it in.  It was 27-13 Grossmont after the PAT.  But the Foothillers made it a three score game again on a pick six and it was 34-13 after the PAT.  Immediately after that, the Foothillers recovered an onside kick and Gaines aired it again to Guevara on the first play of the drive and he took it to the house.  41-13 Foothillers after the PAT.  Guevara decided that wasn't enough and caught a screen pass that went for one more Foothiller touchdown and Grossmont remains undefeated as they win their first league game of 2016 48-13.

Next up for the Foothillers is a trip to Steele Canyon to take on the Cougars, while the Norsemen travel to Lakeside to continue league play against the Vaqueros of El Capitan.