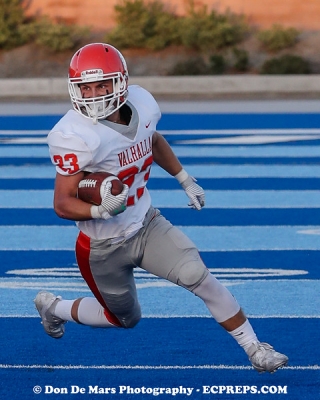 August 31, 2019 (Santee) - We missed the start of the season last week, but this week, ECM Friday Night Lights is back and we’ve got a good one to kick things off.  It’s Valhalla and West HIlls from the Land of Blue Turf in Santee. The Norsemen are coming off a big win against University City last week, while the Wolf Pack are also 1-0 after beating Southwest El Centro. 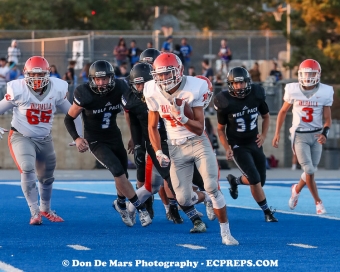 Senior Kegan Baker had a few good runs for Valhalla on their first drive, but the Norsemen went three and out and a bad punt gave the Wolf Pack great field position.  Senior Jake Maheu punched it in at the goal line. The Master of Mayhem put the Pack up 7-0 after one.

But Kegan Baker always makes it clear he never goes away, and in the second, he broke some tackles in the red zone and wormed his way into the red zone from 16 yards out and Valhalla tied the game.  West Hills fought their way downfield and punched it in again after a bobbled punt return by Valhalla gave them good field position. The Pack led 14-7 at the half. 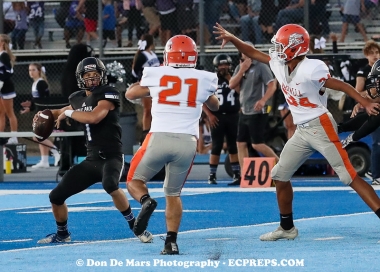 It was Valhalla that started the scoring in the second half with a field goal to help them creep a little closer.  Baker set the Norsemen up big on their next drive with a monster run that set up his short rush into the end zone. The Norsemen had their first lead of the game, up 17-14 after three.

Baker sealed the deal for the Norse in the fourth with a one-yard rush.  The new and improved Norsemen staged an impressive comeback and moved to 2-0 on the season with a 24-14 win.  The Wolf Pack fall to 1-1. 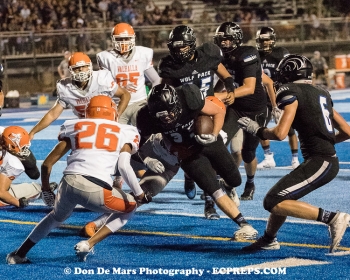 The Norsemen take their bye week next week, while the Pack host Santa Fe High School from Santa Fe Springs, CA at 7 p.m.