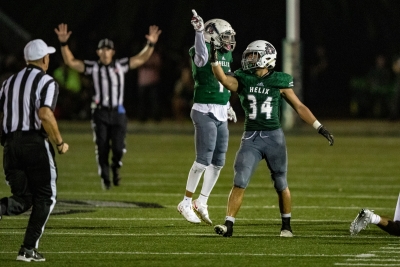 September 14, 2019 (La Mesa) - Week four of ECM Friday Night Lights promises to be a good one.  We went to Helix High School, where senior running back and all-time Helix career rushing leader Elelyon Noa and the Highlanders hosted the Dons of Cathedral Catholic.  Helix is 1-1 coming off of a bye week. Helix has Noa. The Dons have Catholics and some of the best athletes in San Diego. Let’s dive right in. 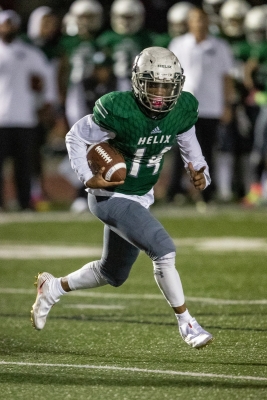 The Highlanders washed no time.  Senior quarterback and West Point commit Delshawn Traylor completely faked out the Dons’ defense and rushed 62 yards in the opposite direction for the score to put the Highlanders on top, but the Dons answered immediately with Zavien Watson’s rushing touchdown in the red zone to tie the game.  But at the end of the quarter, the Scotties answered. Traylor on the screen pass to sophomore Christian Washington gave the Scotties the 14-7 lead after one.

The Scotties’ defense kept the Dons at bay in the second and senior kicker Elijah Laing added to the lead with a 30-yard field goal.  At the end of the half, two seniors connected as quarterback Kamryn Brown connected with wide out Tim Christopher for the 34-yard score.  Helix led 24-7 at the half.

The Dons opened scoring in the second half and what better way to do it than handing it to a guy named Christian?  Junior tailback Christian Hall broke through the coverage for a 41-yard touchdown run. He must’ve been in a real holy mood last night, as later in the quarter, he broke the tackles again for a 52-yard score.  The Scotties were holding on by three, but there was no way they’d let these pious trespassers get away that easily. After Washington’s 93-yard kickoff return, Noa sealed the deal with the four-yard touchdown rush and the Scotties were back up 10, 31-21, after three. 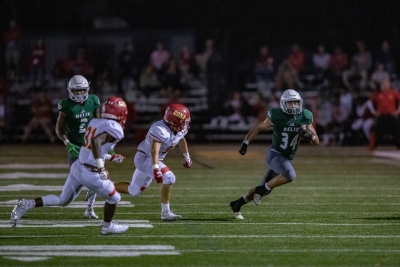 Brown and Noa iced the game in the fourth, connecting on a 57-yard pass for the score.  The Scotties took over on downs after a Cathedral penalty and failure to convert on fourth down gave them the ball at the five yard line.  Noa punched it in for another Helix score. The Dons tried to get back in it, with senior quarterback D.J. Ralph passing to junior running back Colman smith for the eight-yard score, but the Scotties prevailed for a big, big 45-27 upset—in a game we thought was going to be close—to move to 2-1 on the season.  Noa had 22 carries for 188 yards and three touchdowns. 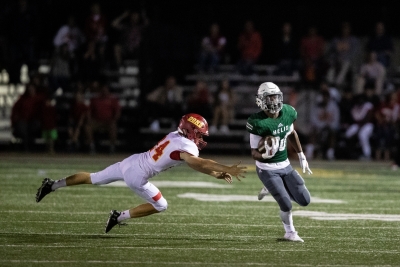 Helix will keep it pious next week, traveling to face St. Augustine.  Kickoff is at 7:30 p.m.