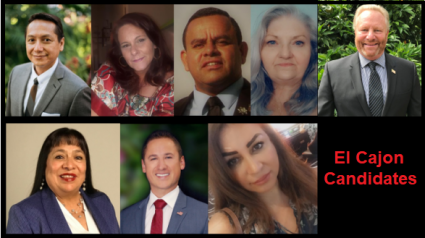 Video of the district 4 forum is now posted. Click here to view video.

The forums will be on Zoom and livestreamed on Facebook at https://www.facebook.com/EastCountyMagazine.  Video will also be posted later on our website for those unable to watch live.

The public can send questions to editor@eastcountymagazine.org up until noon the day of the forum.

Ten candidates are on the ballot in the highly competitive District 2 and 4 races.  (In District 3, Councilman Steve Goble is running unopposed.)

All candidates in District 2 and 4 have been invited. Eight have agreed to participate. In District Two, participants will include Humbert Cabrera, Stephanie Harper, Juan Carlos Mercado, Michelle Metschel and Martin Van Dinteren.  In District Four, participants confirmed are Estela De Los Rios, Councilman Phil Ortiz, and Dania Shaba. The fouth candidate, Billy Thigpen, advised ECM that he is suspending his candicacy and endorsing De Los Rios.

Below is information on all candidates running in Districts 2 and 4. Click each name to view the statement of qualifications submitted to the city of El Cajon.

District Two
Humbert Cabrera is a planning commissioner and small business owner. He was named Citizen of the Year for his involvement in The Chamber of Commerce and nonprofits such as Rotary, Salvation Army and the Elks. He says he wants to reduce “overburdening” government regulations to make “liberty, jobs, clean and safe streets and schools” priorities along with homelessness.  His endorsements include former State Senator Joel Anderson, Pastor Harold Brown and Councilman Bob McClellan.
Leticia Dickerson says she has gone from being homeless to owning two small businesses and has empathy for “all sides of the spectrum.”  She organizes an annual community outreach, SoCal Day of Hope and has also mentored at-risk youth through several organizations. “It’s as if the city forgot about the 2nd district,” she says, adding that she wants to fight to help others and bring growth to her neighborhood.
Stephanie Harper is the mother of two children and works as a residential relief staffer. She is troubled to see children raised on the streets, in cars and motels. She wants to help the homeless, keep Crisis House hope and funded, and provide employment training for a “hand up, not a hand out.”  She wants a citizens oversight committee for the police department and pledges transparency in how tax dollars are spent, as well as cuts to wasteful spending. She is endorsed by the county Democratic party.

Juan Carlos”Charlie” Mercado is an Iraq War veteran who grew up in hardship after his father abandoned the family at age four and his mother passed away a year later. He became a pinata maker and field worker before attending San Diego State University and eventually enrolling in the Army. He founded Deported Veterans of America to help immigrant veterans who were deported and has written books on the subject.  He says he does not take donations from corporations, lobbyists or special interests.

Michelle Metschel is a defense industry administrator who says she supports strong public safety, safe and clean parks, a balanced budget and healthy rainy-day emergency fund. She wants to protect the city from “rampant drug use, homeless encampments and rioting; she opposes defunding police. She says she is fiscally conservative and pro business but socially moderate and supports social programs, having been homeless as a teen. She has been involved in the International Friendship Festival, El Cajon Community Clean Up and homeless outreach. She is endorsed by Mayor Bill Wells.

Martin Van Dinteren is a retired general contractor who has also worked as a building inspector for the city of El Cajon. He wants to use his expertise to expedite the building permit process and help businesses operate outdoors during the pandemic. He also wants to restore and expand MTS transportation services, and provide a “safe and compassionate” alternative for the homeless.

District Four
Estela De Los Rios is the executive director of CSA, a nonprofit assisting residents with housing and other needs.  She has 40 years of management experience as a board member on multiple agencies. She wants to focus on improving public safety through crime prevention techniques, assure that abused families and homeless people can continue to be served by Crisis House, and encourage development of affordable housing. She is endorsed by the county Democratic Party.

Phil Ortiz was appointed to the City Council, where he authored a code of conduct for officials in El Cajon. He is endorsed by the city’s firefighters and police organizations. He is an energy conservation professional. His priorities are addressing homelessness, ensuring public safety and financial stability. He says he has supported “common sense” efforts to provide residents with rent relief, utility assistance and grants to small businesses during the COVID-19 pandemic. He is endorsed by the county Republican party.

Dunia Shaba says she is proud of her service as a Dept. of Defense contractor who worked in Iraq, and of being a single parent while working 16 hours a day and completing her masters and PhD degrees to become a professor. The Valhalla High School graduate wants to improve communications with Chaldean residents, prioritize education, focus on homelessness and drugs, and address affordable housing needs. She wants ongoing reassessment of community services and police training on discrimination as well as ongoing education.

Billy Thigpen has announced he is suspending his candidacy and has endorsed Estela De Los Rios. He is a former educator and auditor who has worked for nonprofits and says service is a “core value” in his life.  In his earlier statement, he said he wanted to provide leadership addressing diverse needs of El Cajon residents including humanely addressing homelessness, the need for affordable housing, COVID-19 impacts and celebrating diversity to make El Cajon a “thriving and safe” community.

What district are you in? Click here to view the interactive El Cajon City Council District Map 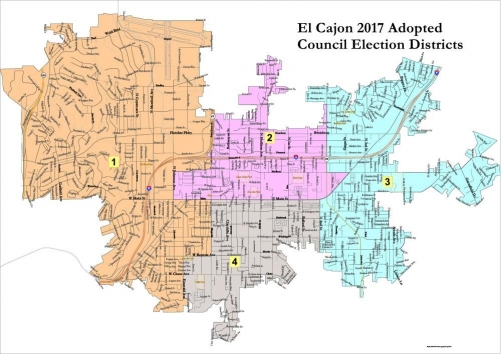