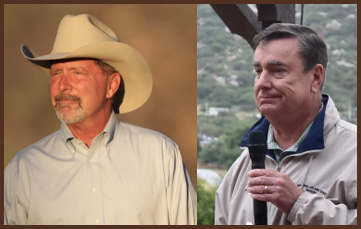 September 18, 2020 (San Diego’s East County) – With Supervisor Dianne Jacob retiring due to term limits after 25 years, the race to fill her seat is one of the most important elections in years for voters in the 2nd district including East County. Two candidates, Poway Mayor Steve Vaus and former State Senator Joel Anderson are in the November runoff.

On Monday, September 21 at 7 p.m., East County Magazine will host a candidate forum via Zoom with both Vaus and Anderson on the hottest issues in our region including wildfire protection, racial justice and public safety, the COVID-19 pandemic, housing and land use issues, homelessness, and more. Watch the livestream at https://www.facebook.com/EastCountyMagazine and send your questions in advance to editor@eastcountymagazine.org!  This is your opportunity to learn more about the leaders seeking to represent you.

Video will also be posted later on our news site and audio will be aired later on KNSJ radio. Below is more information on each candidate:

STEVE VAUS is the Mayor of Poway and Chair of the San Diego Association of Governments (SANDAG).  He’s also headed up committed on Poway’s budget, a community leadership institute, and a substance abuse task force.  He also owns a production company and is a Grammy Award-winning recording artist producing the annual Carols by Candlelight concert to rise money for charities helping children in need. He and his wife had four children and five grandchildren.

“My priorities as East County’s Supervisor will be the same as my priorities as Mayor: keeping us safe from crime and fire, maintaining infrastructure, protecting and expanding open space, encouraging development of new housing, and being accessible,” he says.  Vaus is endorsed by dozens of local officials including Supervisor Dianne Jacob, as well as by Cal Fire firefighters and law enforcement organizations across our region.

JOEL ANDERSON  Joel Anderson has served as State Senator and State Assemblyman representing East County for more than a decade. He previously served on the Padre Dam Municipal  Water District board. He was named legislator of the year from the Small Business Association, Lakeside Chamber of Commerce and veterans’ groups.  He also had a 100% rating from the California Taxpayers Association.

We thank the Facebook Journalism Project for funding to support our virtual candidate forum series during the COVID-19 pandemic.

I conflated. No on Joel Anderson and yes on fellow Republican Steve Vaus.
Just in case you have children, check out this video in which Anderson favors bullying transgender teens with a typical "reverse discrimination" argument. (https://www.youtube.com/watch?v=zbpFClr7F2k) Anderson is also well known for his sexual harassment incident in Sacramento. He also supported dumping sex offenders in the back country with prop 83. So there is a lot of hypocrisy there. Both candidates are Republicans, but Vaus has a clean record, has demonstrated personal decency, and has a history of good public service and real concern for local issues. I'm a back county guy, I'll vote Vaus for the coyboy hat ethics over the Sacramento suit "ethics."