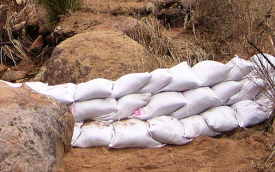 March 11, 2014 (Campo) – Why did the County offer sandbags at multiple locations in the recent storm, but none east of Alpine?  Campo resident Claudia Millerbragg indicated that at least four other people in her community wanted sandbags to protect their properties, but could not access them.

East County Magazine contacted Supervisor Dianne Jacob’s office and in turn, we received a  response from Sasra Agahi, a senior civil engineer in the flood control division of County Public Works, who indicated that as a result of our inquiry, sandbags should be available in Campo in time for a storm due next week.

“ Your comments were the first regarding this concern that came to Flood Control’s attention. Flood Control very much wants to provide excellent customer service to all of our residents, regardless of location. To this end, we are coordinating with the CalFire Campo Fire Station in order to have sand and sandbags delivered there,” Agahi wrote.” If, for some reason, the Fire Station is not able to accommodate this, we will coordinate with the Campo County Road Station.”