December 26, 2010 (Lakeside) – Shortly after reporting about an injured hiker air-lifted off El Capitan Mountain this afternoon, I was dismayed to learn that the victim is East County Magazine’s own videographer Billy Ortiz, creator of our “Video Adventures in East County” series. He was taken to the emergency room at Sharp Memorial Hospital, where he spoke with me by phone moments ago about his harrowing ordeal.

On his Facebook page this morning, Ortiz, a resident of Lakeside, posted that he was going to find ancient bones in hopes of saving the El Monte Valley and El Capitan Mountain from Sunrise Powerlink.  The high voltage power line is slated to be built there, though two other high-profile projects (an Ocotillo wind farm and a reservoir project in Lakeside) have recently been halted by courts after Indian burial sites were found on the properties. Ortiz said he went hiking on private property owned by an acquaintance, searching for artifacts that research led him to believe may be in the remote area. 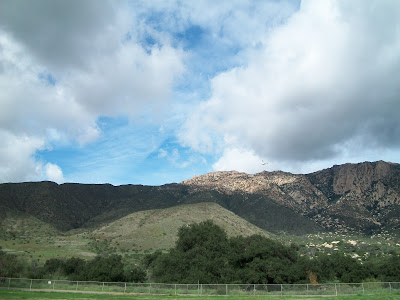 “We decided to go up a little higher,” he recalled, adding that he jumped onto a large rock. “I grabbed onto a big boulder and it gave way.” So did the rock he was standing on, he said, noting that the ground was soft due to the recent rains. “It was a big rock—700 or 800 pounds, and another rock on top of it was around 500 pounds. I fell into some brush and then one of the rocks rolled right over me.”

Miraculously, no bones were broken, although the rock crushed muscle in his leg. But something sharp, perhaps a stick, poked a hole in his thigh that’s "around an inch in diameter," said Ortiz, 50. “It didn’t hit a main artery, but it did bleed a lot,” he told me. “I almost passed out. I thought the worst—I thought my leg was broken and that I’m going to bleed to death right here. I got all dizzy, but then I settled down.” 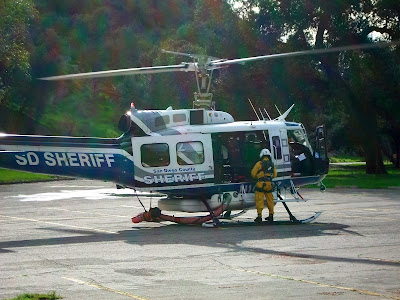 unately, his friend and partner, Pam Wilmers, is a nurse. “She knew what to do,” he said.

Ortiz tossed his cell phone up the hill to Austin Diegnan, 17, who was also along on the hike. But the phone fell and the battery was knocked out. “I had to crawl up and get it,” Ortiz recalled.

Finally, Diegan was able to call for help. Lakeside Fire and the San Diego Sheriff’s ASTREA 1 helicopter found the hikers, but determined that the terrain was too rugged to land a chopper.  So they called in Copter 12, which is staffed by ASTREA and CAL-FIRE personnel. Copter 12 conducted a hoist rescue of Ortiz and Wilmers. The third hiker and two dogs were also transported off the mountain.

“If Powerlink had been there, they couldn’t have done the hoist rescue,” said Ortiz. I would have had to be taken out by foot soldiers all the way down the trail.”

Told that another local rescue agency, San Diego Fire Department, plans to begin charging people who are rescued via its helicopters next year, Ortiz voiced astonishment that accident victims could be stuck paying thousands of dollars for life-saving rescue services.

“I thought our taxes paid for all that stuff,” the rescued hiker said. “We’re already paying—and then we’ve got to pay on top of that? That’s ridiculous.”

Ortiz has staples in his thigh and will be on crutches and possibly a wheelchair for a while, but hopes for a full recovery. The hospital plans to release him tonight, he confirmed.

Amazingly, he and his hiking partner, Pam Wilmers, were able to film the entire ordeal.

“We’ve got video of all of this,” he said, adding that he’ll provide ECM with footage soon. “I wasn’t going to stop rolling my camera,”the intrepid videographer concluded. “This was quite an adventure.”

Ironically, if the PowerLink HAD been there, He wouldn't have been searching for artifacts to stop the PowerLink; therefore, no helicopter hoist needed!