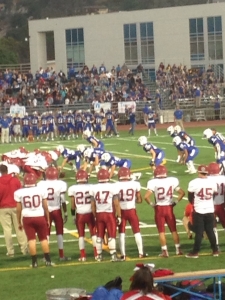 September 16, 2016 (La Mesa) - There were no big conference games this week, so ECM headed to Grossmont High School to see the Foothillers take on the Sweetwater High Red Devils.

The Foothiller football team has dedicated the entire season to Grossmont High School student Ryan Wilcox, who passed away on September 3rd.  Ryan was made honorary captain of the varsity football team.  Tonight, his sister Bailey was captain.  The team wore tank tops with #RyanStrong on them tonight.

With 7:41 left in the first quarter, a punt by Grossmont was bobbled in the end zone and recovered by the Red Devils, who got the safety and took a 2-0 lead.

But the Foothillers got it back after marching downfield and getting the touchdown on a James Mackey run.  The extra point was good and Grossmont led 7-2 with 3:34 left in the first.

After Sweetwater went for it on fourth down and turned the ball over, the Foothillers had excellent field position.  They capitalized on it with a Zak Farris touchdown and Grossmont led 14-2 in the opening quarter with 1:52 left.

In the second quarter, Grossmont didn't stop.  Mackey rumbled into the end zone again and with the extra point, it was 21-2 Foothillers.

In the second half, the Grossmont beat down continued.  Mackey and Domonique Guevara got the touchdown at 10:50 of the third quarter.  With the extra point, it was 41-2 Foothillers.

In the fourth, Sweetwater’s Abel Garcia would run in for a touchdown, but Grossmont still blew Sweetwater out of the...water with a big 41-8 win.

Next week, the Foothillers travel to Lincoln High to take on the Hornets.  Game time is at 6:30 p.m.