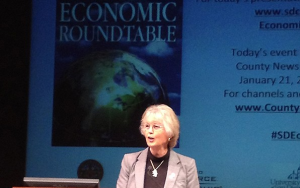 Speakers described housing prices stabilizing in San Diego and unemployment rates continuing to drop.  These were just a few of the insights shared at the event, which again brought together experts to talk about big picture questions on the local, state and national economy.

The states of the job and real estate markets are always a big topic, and experts this year also offered overviews of the Affordable Care Act and how the manufacturing industry is doing. An estimated 400 people attended the free event at University of San Diego’s Joan B. Kroc Institute for Peace & Justice.

“Over its three decades, the roundtable has established itself as the go-to gathering for insight and analysis about the future of our economy,” County Board of Supervisors Chairwoman Dianne Jacob told the audience during her opening remarks (photo). “The state of the economy drives our daily lives, how we work, how we live, how we spend, and it also affects what government can and cannot do.”

Jacob emphasized that the County will continue its prudent approach to spending and fiscal management. The County has used cash to pay for capital projects when possible, saving taxpayers $1.3 billion in interest payments and helping earn the County stellar bond ratings.

Among the many other highlights at the event:

“So it feels better but the environment can change rapidly as we’ve learned,” Crowley said.

During the Great Recession, the nation lost 8.8 million jobs, said Alan Gin, Associate Professor of Economics at USD’s School of Business Administration. We’ve gained back about 7.6 million jobs over the last 46 months, but need more job growth to keep up with the population gains.

Gin predicted weak growth nationally in the year ahead, including GDP growth of 3 percent, which is higher than 2013. The U.S. unemployment rate will drop to 6 percent, but will drop lower locally, he predicted. The local economy will see solid growth, he said, adding 25,000 new jobs.

Reshoring, or the return of manufacturing jobs to the U.S., as opposed to offshoring, is an emerging trend and will continue to increase in 2014, said Michele Nash-Hoff, president of ElectroFab Sales. Workers will need to be trained or retrained to fill what she described as a current national shortage of 600,000 skilled manufacturing workers.