June 27, 2012 (El Cajon)– At a press conference on June 22, members of the new ECPAC Foundation provided details to media on their proposal to reopen the East County Performing Arts Center (ECPAC) in time for the city’s centennial celebration in November.

Leaders presented City Manager Doug Williford with their 60-page plan in a meeting that extended from a planned 10-15 minutes to an hour and a half.  Foundation members expressed optimism, noting that Williford asked many questions and showed genuine interest in plans to revive the theater with innovative and cost-effective improvements.

“Our hope is that the city will take this seriously and give us a chance to save this theater,” said Ray Lutz, whose Citizens Oversight Panels is providing temporary fiscal sponsorship of the new ECPAC Foundation pending a several-month process for the Foundation to obtain independent nonprofit status through the Internal Revenue Service (IRS). 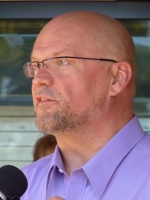 “This proposal is a good one,” said journalist/musician Paul Kruze, a  founding member of the ECPAC foundation who has invested many hours in researching prior management teams to analyze what was done well—and what can be improved.  “We have the benefit of 20/20 hindsight,” he said, adding that a lot can be “fixed incrementally.”

Kruze added, “I also want to take this opportunity to thank the City of El Cajon for its help.”

The Foundation proposes to run the theater without any substantial subsidy from the city – a big change from past management groups.  The proposal includes some creative ideas.  The foundation aims to add a backstage patio that could be used for  pre-and post-performance events, boosting revenue potential.  Restrooms on the patio could also be opened when needed to serve the public during car shows, outdoor concerts and other downtown civic events.

The Foundation also proposes to add a dance-floor type area in front of the ECPAC stage, over the orchestra pit, that would enable the theater to bring in concerts that will attract a “younger crowd that wants to stand up in front of the stage and whoop and holler,” Lutz said.

The theater would still feature some tried-and-true favorites, such as the popular musicals performed by Christian Youth Theater.  Once stability is established, Foundation members also hope to lure back groups such as the Grossmont Community Concert Association, which sold out all of its concerts at ECPAC.

The Foundation also aims to bring in some headliners with star power as well as classical groups such as La Jolla Chamber Music, which has expressed interest. In addition, the theater would be open to community groups such as the large Chaldean community in El Cajon, as well as business groups and others who wish to rent the facility. 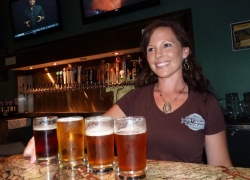 Adding alcoholic beverages for sale and drink holders to seats would further boost revenues, as would improved signage and publicity for theater events.  Members say  El Cajon Brewery could sell  locally-crafted brews in the theater.

The Foundation has asked the city to help with costs of maintenance, critical repairs and signage. Ultimately members hope the City will add an electronic sign near the freeway to promote not only ECPAC events, but also downtown car shows, outdoor concerns and other El Cajon attractions.

The theater has been closed for two and a half years.  The city had initially banked on state redevelopment funds to cover roof repairs and other upgarades. But after the state dissolved redevelopment funding, the city gave a six-month exclusive period to developer Neal Arthur to craft a proposal for tearing down ECPAC and building a hotel on the site.  The city later rejected that proposal, however, amid liability concerns and other issues.

ECPAC Foundation is asking the city for a similar six-month exclusive period to refine plans to save the theater.  The Foundation has also asked for a public workshop on restoring ECPAC, noting that the city had been willing to host a workshop on tearing down the facility. 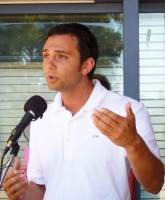 “It’s better to save this theater than to tear it down,” businessman Ben Kalasho, representing the Chaldean community, stated at the press conference.  Tearing down the theater would cost $2.1 million.

By contrast, investment in short-term repairs would cost far less—and boost tax revenues from local businesses.  “It will save the community millions of dollars,” said Kalasho, a council candidate who predicts reopening the theater will have a positive impact on downtown businesses that have struggled since the theater went dark. Reopening “will be a chain reaction to the economy of downtown El Cajon.”

The City had previously obtained a bid of $4.3 million for a grandiose plan to reroof the theater, move its entrance to open onto Main Street and make other major improvements.  That figure assumed the availability of redevelopment monies that the state axed.  So now ECPAC Foundation proposes  what supporters call a “let’s get real” budget.

After several visits to the theater with various experts, holding more than ten ECPAC Foundation meetings and consulting via phone and email with additional professionals, the ECPAC foundation estimates essential repairs could be done for as little as $400,000 to reopen the theater by November—just in time for the City’s centennial celebration. 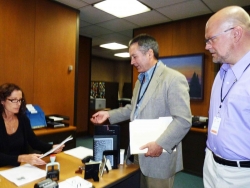 ECPAC Foundation has done its homework, comparing ECPAC to numerous other local venues including not only city-owned performing arts centers in Poway and Escondido, but also such popular and profitable venues as Humphreys on the Bay and House of Blues.

Restoring the theater is a matter of priorities, Lutz noted, pointing out that the city spend millions on a new public safety center as well as $2.1 million on relandscaping the exterior areas around the theater, while the theater itself remained shuttered.

ECPAC Foundation has support from several of the original founders of ECPAC and their families. Opened in 1977, the theater was built with funds from the Grossmont College District and numerous private donors whose names are still inscribed in stars embedded in the lobby walls. 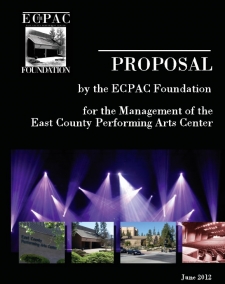 Foundation members voiced support for Council’s goal of bringing an upscale hotel to downtown El Cajon – as long as it’s on a different site than ECPAC.

“Until there is a theater here, it’s not viable for a hotel here—even though everyone would love to see a four-star hotel downtown,” said Lutz.  By contrast, a revitalized theater would be a draw to attract a quality hotelier to the region—and help fill up seats at the theater with hotel guests.

Duane Swainston,  a candidate for City Council, offered praise for the ECPAC Foundation plan. the plan.

“I’m happy with the proposal. It benefits the community and businesses,” he concluded. Reopening the theater will “bring people downtown and showcase El Cajon” he predicted, while also “serving the arts and entertainment needs of San Diego County.”