Public urged to attend and support call to save the theater; plan will reopen venue before City’s Centennial celebration this fall and calls for phased renovation 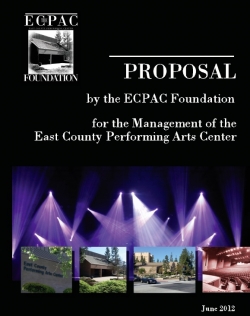 June 21, 2012 (El Cajon) – After objecting to a proposal by the City of El Cajon to demolish East County Performing Arts Center (ECPAC) and build a hotel on the site, community members have united around a goal of saving the theater, forming the ECPAC Foundation.

At a recent meeting, Council voted to reject a developer’s proposal to tear down the theater, then invited ECPAC Foundation to submit a proposal to save the venue.

Today, the organization will hold a press conference at El Cajon City Hall, 200 Civic Center Way, at 3 p.m. to outline its proposal.  The group will submit an extensive plan for operating the theater to the City Manager at 3:30 p.m. The public is encouraged to come show support to save ECPAC.

Foundation leaders say that there is a reasonable way to save the ECPAC theater from demolition for perhaps 10% of the $4.3 million cost suggested by consultant Kurt Swanson in his March 2010 Conceptual Business Plan. The Foundation also proposes to run the theater without a required direct monetary subsidy from the City, unlike former managers.

“We really don't want to see the theater demolished or closed, especially during the November 2012 Centennial celebration of the City of El Cajon,” said Ray Lutz, Founding Chair of the ECPAC Foundation. “We toured the theater in April to discover what it would take to open it up again… Instead of $4.3 million, we figure it can be reopened for about $400,000 in repairs, maintenance, and renovations.” He added, “Our plan is practical and feasible.”

“The big difference in our proposal is that we're saving the City the $350,000 annual subsidy previously paid to Christian Community Theater,” said Paul Kruze, a Foundation Board member, professional trumpet player, and media personality. “We feel CCT offers great programs for children to learn to sing, dance, and act, but as the manager of the theater, they did not come through with the headliner schedule the community was hoping for. We can do better, and we can do it without a direct subsidy.”

Noting that the City gave developer Neal E. Arthur an exclusive negotiation period of six months on the hotel proposa, Lutz said the ECPAC Foundation should be given then same chance to negotiate with the City on plans to repair and reopen the theater. “Fair is fair.”

The main business points of the proposal state that the theater would be realigned from a pure “Performing Arts” venue to an “Arts and Entertainment” venue and pick up more mainstream acts that may not fit into a more ritzy venue. It will emphasize concessions including beer, wine, and cocktails to boost revenues. It also includes a phased renovation plan to steadily improve the venue, signage, and other surrounding spaces.

Although the Foundation does not propose getting a mandatory subsidy from the City, the plan does propose that the utilities be picked up by the city, as they have for all other theater managers, and that the City may wish to fund specific projects or rent the theater for certain civic events.

The entire proposal is approximately 60 pages and can be found here:
http://www.copswiki.org/Common/M1269

Since the Foundation has had limited access to the theater and has not had a chance to fully investigate all issues, the Foundation board decided to include a disclaimer in the document to allow the Foundation to continue to investigate these details after the City has agreed to move forward with negotiations.

If the City agrees to negotiate with the Foundation, the plan will be improved to include the actual costs to fix the theater. The Foundation plans a Gala Fundraiser this summer to reach out to supporters, artists, and even theater management and production companies who may want to rent or help run the theater.

“This is the best organizational type for such a theater,” said Lutz. “This theater was originally funded and put into place by the tax-payer and by the blood, sweat and tears of performing arts supporters. It must stay in the public domain and must not be turned over to private developers.”

The ECPAC Foundation is an offspring of the SaveECPAC project of Citizens Oversight Projects, a 501(c)3 nonprofit organization. Until the Foundation secures its own nonprofit status, it can be sponsored by this parent organization and accept tax-deductible donations. Until the plan is approved by the City, the Foundation is accepting pledges for future donations that will be accepted at the Gala Fundraiser event planned for this summer.