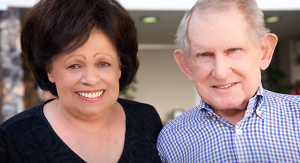 April 27, 2021 (La Mesa) -- The California Park & Recreation Society (CPRS) announced at its annual conference held virtually this month that Ed and Sandy Burr were recipients of the organization’s 2020 Champion of the Community Service Award of Excellence. The award honors individuals or organizations who have contributed significant effort to influence and improve the quality of their community through parks and recreation. This statewide award recognizes the contributions of those who volunteer and/or provide support and services that furthers the mission and quality delivery of park and recreation services, programs and facilities.

As a prominent business family in La Mesa, the Burrs have made many personal and financial commitments to La Mesa and surrounding communities. After entering the waste collection industry in 1954 as the owner/operator of a single truck, they developed EDCO and its sister company Burrtec Waste Industries into one of the largest family-owned and operated waste collection and recycling firms in the United States. EDCO’s commitment to the environment is displayed by investment in Southern California’s newest comingled recycling facility and a new state-of-the-art anaerobic digestion plant for post-consumer food and green waste; in addition to operating a near zero-waste Renewable Natural Gas (RNG) powered collection fleet. The Burr’s and EDCO’s commitment to the communities in which they serve is evident through generous donations to community programs and capital projects to improve quality of life of citizens.

The Burrs have been long known for their community involvement and support of various organizations across the San Diego region. Under Ed’s leadership as a founding board member, the La Mesa Park & Recreation Foundation (LMPRF) was established in 1999 to facilitate quality projects and programs that provide activities to strengthen community and family bonds and foster pride in La Mesa parks. The Foundation granted more than $1 million towards their first capital project, the development of the 23-acre joint use sports complex located on the grounds of Parkway Middle School, now known as the Junior Seau Sports Complex. Over the past 20 years Foundation projects have included the “It’s Child Play” campaign that raised funds to replace aging playgrounds in five City of La Mesa parks. Because of the Burr’s generous support to the Foundation the new playground at Vista La Mesa Park included an EDCO recycling truck as the tot lot in their honor.

Mr. Burr serves on the board of directors for the Challenge Center, a not-for-profit facility that provides rehabilitation and physical therapy. The Burrs were also co-chairs of a recent Sharp Grossmont Hospital capital campaign and donated $5 million toward its new heart care facility, now named the Burr Heart & Vascular Center, in recognition of their generous gift — the largest in the hospital’s history.

“EDCO and the Burrs are financial sponsors of every special event held by the City and the Foundation, in addition to generously giving to many other organizations in the San Diego region and other communities where their business operates” said La Mesa’s Director of Community Services Sue Richardson. “It is with great pleasure that the City of La Mesa recognizes Ed and Sandy Burr as champions of the community.” The Burrs are honored in downtown La Mesa’s walk of fame and Ed is a lifetime honorary member of the La Mesa Rotary.

To learn more about the La Mesa Park and Recreation Foundation visit www.lamesaparks.org. CPRS is a membership organization with just over 4,000 members representing the 535 local parks and recreation agencies throughout the state. The mission of CPRS is to advance the profession and its members through education, networking, resources, and advocacy.  Learn more at www.cprs.org.