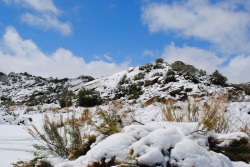 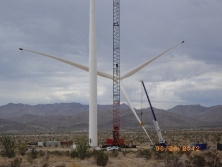 Photo, right: Blades being hoisted onto wind turbine in Ocotillo

“We are still actively opposing Tule Wind and hope it never gets built,” Donna Tisdale told East County Magazine. Tisdale and the citizens’ group Backcountry Against Dumps have two legal challenges pending. Tisdale also chairs the Boulevard Community Planning Group, which voted against the project but was overruled by the San Diego County Supervisors, with Supervisor Dianne Jacob voting no and four other Supervisors voting for the project.

The agreement covers the first phase of the 14,000-acre project, which includes 67 turbines on federal Bureau of Land Management property at the gateway to the McCain Valley federal recreation area, as well as on privately-owned Rough Acres Ranch.

Although permits for the project’s first phase have been approved, permission from the California Public Utilities Commisison (CPUC) is still needed, and must provide opportunity for public comment first. In addition, the U.S. Fish & Wildlife Service has not yet issued take permits for golden eagles at the site.

The project has generated substantial opposition in the community, with concerns raised over the impact of 500-foot-tall turbines lining the main entry to the federal recreation area.  Two lawsuits remain pending.

Concerns include destruction of views and habitat, danger to eagles and other raptors, disruptions caused by noise, infrasound and  flashing lights, and fire danger since each turbine contains 200 gallons or more of flammable lubricating oil.  Turbines would line the only road in and out of campgrounds in McCain Valley, so a fire or collapsed turbine could potentially trap campers and other visitors in McCain Valley.

Harley McDonald, senior business developer with the Spanish energy company Iberdrola’s San Diego team, told the San Diego Union-Tribune, “It’s one of the few sites in San Diego County that is a viable site for utility-scale projects. We are very excited to finally get to construction.”  The project would employ up to 325 people during construction, Iberdrola estimates, however the company has not yet announced how many jobs would be filled locally.

The company hopes to complete construction in late 2017. Phase 1 would include only BLM and Rough Acres Ranch property, not state lands and tribal lands owned by the Ewiiaapaayp tribe which may include additional turbines for a later phase of the project. The State Lands Commission has not yet held a hearing to consider Tule’s leas application for additional lands adjacent to Cleveland National Forest just north of the Manzanita and La Posta Native American reservations.

The lawsuits filed by Tisdale and Backcountry Against Dumps include a challenge to the BLM’s approval of Tule Wind, currently in the 9th Circuit Court of Appeals.  The other case is a challenge to the County’s Wind Energy Ordinance including a waiver of low-frequency noise limits for Tule Wind.

Tisdale told East County Magazine, “We had a professional noise consultant conduct testing at homes impacted by the existing Kumeyaay Wind and Ocotillo Wind turbines who documented low-frequency noise/vibrations outside homes and out to six miles from those turbines. We also documented high levels of electrical pollution at some of the same homes. Low-frequency noise emissions can trigger major stress reactions such as the fight or flight syndrome,” she said, adding, “The wind turbines have impacted people’s lives and well-being.”

The legal challenge also questions a groundwater investigation for Tule Wind that is over five years old, completed before the current four-year drought.

Tule Wind has an agreement with Jacumba Community Services District to provide millions of gallons of groundwater if Rough Acres Ranch’s own wells can’t fill the construction needs. Rough Acres has also secured a water purchase agreement from Pine Valley Mutual Water Company that shareholders are currently fighting to overturn.

The County has not yet approved completion of major use permit conditions for Tule and the new Rough Acres Ranch Road needed to access the project and bring in turbine parts and equipment.

Iberdrola has estimated that the entire Tule Wind project could generate up to 200 megawatts (MW)  powering up to 60,000 home phase 1 could power up to 40,000 homes if the project produces at the capacity forecast.   The project would help California meet the state’s ambitious renewable energy mandate of 33% of power from renewable projects by 2030. (View Iberdrola website on Tule Wind.)

But some local residents contend the cost is not worth the power that could be produced.

Tisdale concludes that outside elected officials who support Tule Wind “should consider if they would support 400 to 500 foot tall noise and blinking industrial wind turbines in their neighborhoods, operating as close as 1,000 feet of their homes and loved ones. For them, it is out-of-sight, out-of-mind. For Boulevard area residents, these projects are unacceptable wildfire-sparking monstrosities that will forever alter our community, our views, and public health and safety. Adding insult to injury, Tule Wind will receive a 30% cash grant or 30% Investment Tax Credit based on the cost of the project, at the expense of taxpayers in addition to $23 per megawatt (MW) hour in Production Tax Credits on top of the high price of any electricity they might generate.” 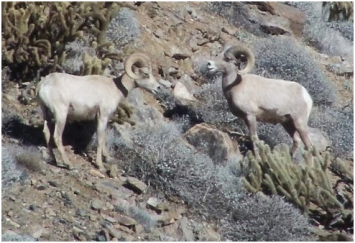 Howard Cook, former Chair of the Jacumba Sponsor Group, has reached out to us with additional concerns.  Citing East County Magazine's photo published July 2014 showing endangered Bighorn Sheep grazing in McCain Valley near Sacatone Road (left), Cook observed, “The Tule Wind advocates and County said this was not Bighorn Sheep habitat. Same for Golden Eagles.”  He adds that the Environmental Impact Report’s eagle portion was done by David Bittner “who was subsequently convicted of incidents involving the death of Golden Eagles.”

Cook also raises concerns over water.  The main otuside source of water (other than Rough Acres' own wells), 20 to 25 million gallons, for Tule Wind’s construction was planned to be provided by Jacumba Community Services District, however Cook states that the district is only allowed by the Local Agency Formation Company (LAFCO) to sell to water within its boundaries, not outside.

“Most of the green energy and other major projects here (Tule, Soitec, Rough Acres, Jacumba Solar) plan to use the same water sources (JCSD and Pine Valley),” Cook notes, adding that some also cite Padre Dam as a potential source, but that Padre can only sell in winter months.  A hydrologist at San Diego State had concluded that water needs from the Soitec project along could forever negatively impact the ecology of the region by draining the aquifer below what can be recharged from rainfall.

ECM asked SDG&E why it did not sign a power purchase agreement for the Tule Wind energy.  Stephanie Donovan, senior communications  manager at SDG&E, replied, "SDG&E and the developers of the Tule Wind project have at various times had discussions regarding the project, but we were not able to reach agreement. As indicated in news reports, Iberdrola Renewables has signed a power contract with Southern California Edison to buy electricity from the Tule Wind project. We’re pleased the developers of Tule Wind found a partner to work with and we wish them well."

She added, "SDG&E has been adding renewable resources to our portfolio at a rapid rate since 2005 and today, we have met the state’s 33% renewable power goal, five years ahead of the 2020 deadline – the first utility in California to do so. We have made great progress – and there’s more on the way. We expect to reach 40% renewables in the next two years. Another key fact: 90% of our renewable contracts are with facilities in California – 30% in San Diego County, 10% in Imperial County and 5 % in Orange and Riverside Counties, which of course means more “green jobs” for California."