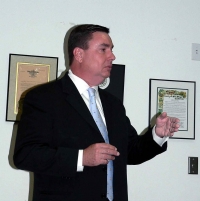 March 2, 2010 (Sacramento)--The RGP Prosthetic Research Center, a San Diego company that provides artificial limbs for California Children's Services, is in danger of having to stop providing these critical services for children in need... again.

I recently spoke with Mr. Thomas Guth, the company's President. Guth is understandably worried. Last Monday, California State Controller John Chiang warned the legislature and Governor that unless they found "cash solutions" by March, California would be unable to pay its bills. A grim reality looms ominously above California taxpayers once again - IOUs.

Guth told me that if the state issues IOUs again in 2010, he "fears that [he] will be unable to continue to provide needed care to patients as we may be unable to finance the components needed to fabricate their artificial limbs."

The RGP Prosthetic Research Center is the largest independent prosthetic facility on the West Coast and is a world leader in prosthetic research. The San Diego facility has 22 employees, many of whom are amputees themselves who have first-hand knowledge about the needs of their customers.

How did our once-Golden State get to this point?

Mr. Guth's story is a symptom of our state's failed policy of "borrowing its way out of debt." At the end of 2009, we saw the state impose an additional 10% withholding on payroll taxes although no additional taxes were due. Additionally, the issued over 448,000 IOUs totaling $2.35 billion in 2009 and employees, businesses and all citizens that were desperate for the products that companies like RGP provide, suffered needlessly due to the state's inability to balance its books.

But the horror story doesn't end there. While the state was borrowing from you to cover its debt, liberal Sacramento politicians had the audacity to pass 150 new bills off of the Assembly floor with no Republican votes that created $1 billion in new spending. Thanks to Sacramento's spending binge, California faces an estimated $20 billion deficit over the next 18 months. And while the state demands that you pay cash for your state taxes, DMV fees and tuition for state college, they're going to stick taxpayers, charities and vendors with IOUs once again.

It's time for citizens like you and me to put this to an end.

I introduced, with the support of 74 co-authors, Assembly Bill 1506, the IOU Taxpayer Protection bill, to free us from the state's forced-borrowing. The concept is simple and fair: IOU's would be treated like department store gift cards - allowing taxpayers to use them to pay any state fee or tax. This simple concept would fix a fatal flaw in our system and offer the maximum taxpayer protection while saving the state millions in interest payments.

Unfortunately, this bill could have become law last year if it were not for some fat cat legislators who refuse to stop the state's spending spree despite not having the cash. They want to force IOUs on you while they continue to spend your tax dollars. Even common sense legislation like AB 1506 faces an uphill battle, and it is rumored that my bill is in danger of dying in the dead of night behind closed doors in a Senate committee. I need your help

I have created a special website - www.AB1506IOUbill.info - to gather signatures in support from everyone who's fed up with Sacramento's overspending. Our state is at a crossroads - we all need to get involved to put California back on the road to prosperity. This bill is a first step on that road and we won't get there without your help.