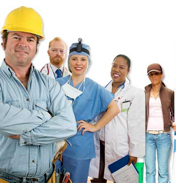 We are losing the middle class. Wages are spiraling downward, workers are losing healthcare, yet CEOs are earning hundreds of times more than the average employee and pocketing billions in bonuses for failing companies. This is wrong.

Workers in unions earn 30% more than non-union workers—and are 59% more likely to have health insurance provided by employers. Unions help families improve their standards of living.

But employees’ rights to unionize have come under attack. Studies show that the majority of workers who try to unionize are intimidated by employers; one study of 400 union elections found 79% of workers felt they were likely to be fired for union organizing; 92% of employers forced employees to attend anti-union presentations. Penalties for employers who violate the law amount to a slap on the wrists.

In a recent editorial in the North County Times, Congressman Duncan Hunter repeated false statements made by Fox News and the Republican Party. He claimed the EFCA would “deny workers their right to a secret ballot.” But Media Matters andthe Wall Street Journal confirm that is untrue.

The EFCA would give workers a choice of two ways to form a union. If one-third want an election, an election will be held, using secret ballots. Workers could also form a union if a majority of members sign cards in support of unionizing. This protects workers from harassment and threats. Current law already allows unions to form via card-check if an employer agrees, major companies such as Kaiser have already done. The new law will extend this right to all workers, including those who need it most—workers whose employers use illegal high-pressure tactics to block unionizing efforts.

EFCA also imposes stiffer penalties on employers who break the law. In addition, since many employers have refused to provide contracts even years after a union is formed, the new law will require binding arbitration if a contract with a new union is not reached after three months.

Hunter also claims that the EFCA will hurt small business. But that theory collapses in the face of actual research and evidence, according to the Economic Policy Institute. Raising wages puts more money in the pockets of consumers to spend—a move that should ultimately help, not harm, small businesses.

Polls show that the majority of Americans support the Employee Free Choice Act to help American workers and their families, restoring balance between working people and wealthy corporate powers.
But Congressional Republicans have blocked the EFCA in Congress. Local Congressmen Brian Bilbray, Duncan Hunter, and Darryl Issa continue to oppose this measure, standing against interests of working people in their districts.

This editorial reflects the opinions of its author and does not necessarily reflect the views of East County Magazine. If you wish to submit an editorial for consideration, please send to editor@eastcountymagazine.