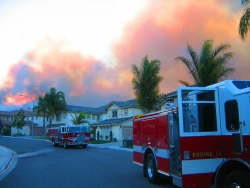 September 10, 2009 (San Diego)--Fires have a catastrophic effect on the lives of Californians. When the new state budget was recently passed and signed by Governor Arnold Schwarzenegger, $27 million was cut from the budget with the stroke of a pen along with funding for the DC-10 fire retardant bomber that helped fight fires. If you don't think we need critical emergency fire services in San Diego County, or cannot afford it, think again.

Who among us does not recall the devastating 2007 wildfires where walls of wind-whipped flames burned communities all around us? Businesses were disrupted, causing significant loss of revenues and productivity. Hundreds of people were evacuated from their homes. During that fire season, over 375 homes in San Diego County were destroyed.

With the back country burning in Los Angeles, we need to be on heightened alert in San Diego County where intricate network of canyons through our urban areas voraciously fuel deadly fires. September and October is when the Santa Ana winds pose the greatest danger for the quickly spreading firestorms.

This year our natural vegetation, because of longstanding drought, has created kindling waiting for the requisite spark. On top of the dangerously dry brush, we have a water shortage, putting even more homes and properties at risk.

While several of our own San Diego County firefighters are in Los Angeles helping to combat that fire, the Legislature is meeting to consider whether to adopt AB 196, an emergency response initiative which needs a two-thirds vote in the Legislature. This bill creates an emergency response fund by requiring a 4.8 percent surcharge on commercial, residential and multi-peril insurance policies. This measure is critical for our region's protection. We cannot afford to abandon vital public services that provide us with mutual fire protection safety.

No new taxes seems to be the battle cry of many of California voters, but if the devastation of the fire season hits our communities as it could very well do this year, we will remember: you get what you pay for.

We cannot afford to take a "do nothing" bare bones approach to fire protection in California. For us, failure to have adequate fire protection is like the levee failure in New Orleans - predictable - a disaster waiting to happen.

Tracy Emblem is an attorney and a Democratic candidate for U.S. Congress in California's 50th District. The opinions expressed here reflect those of the author and do not necessarily reflect the views of East County Magazine.  If you wish to submit an editorial for consideration, please contact editor@eastcountymagazine.org.

At times "No new taxes", warns our politicians to be better stewards of the tax payer funds they administrate. However, we have been on that tact for quite a while and it is our responsibility to take care of the our necessities, both in our personal lives as well as for our community. If times are tight, we can't stop feeding our children or paying our bills. Our government is the same way, if we run up the bills we need to pay them and if we need personnel and resources to keep our community safe and prosperous then we need to find a way to provide for those needs.

Starving the politicians isn't working, they don't seem to be getting in there and getting rid of the systemic waste and redundancy, let alone the out and out pork. A new tactic might be in order. We need to begin to think about means, other than "no new taxes", to get rid of the waste in our government. In the meanwhile we must pay our bills and there is a limit to how much we can cut from existing programs. They talk about how we are leaving debt to our grandchildren, when I hear that, I don't understand the "no new tax" mantra, I would rather pay a bit more now than leave large debt to future generations.

The bottom line is we need adequate fire protection, we also need adequate funding for abatement so neighborhoods are protected if the worst happens. We need to put the breaks on our government withholding vital services and resources so it can balance it's own checkbook. I bet it would help if we put a double wide in a high fire danger area and call it the Governors Mansion....(and actually require the Governor to live there)

Maybe we need to take more local responsibility where we can. Take back our safety and well being from Sacramento and Washington D.C. If we have to come up with new tax money to keep us safe, it would be much better if we collect that money in such a way that the local people both benefit from the money and have impact on the decisions on how the money is spent. Sometimes, smaller is better.