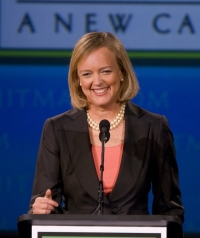 We face a 12 percent unemployment rate – one of the highest in the country – and a $20 billion deficit. Overtaxed and overregulated, companies are closing their doors and moving to neighboring states with lower costs to do business, and discouraged workers are leaving town in order to make a living.

I am concerned about the future of California. That’s why I am supporting Meg Whitman to be California’s Republican nominee for governor.

Meg is the only candidate with well-rounded experience and a bold vision to lead our state during these challenging times.

Her business experience spans 30 years, including positions at Procter & Gamble, Hasbro and Disney.

When she joined eBay as CEO in 1998, the company was a 30-person start-up with a little over $4 million in revenue. Just ten years later, when Meg stepped down, eBay was a global e-commerce leader with 15,000 employees and nearly $8 billion in revenue.

Meg understands that for California’s economy to recover we must foster growth among the state’s small businesses. After all, small businesses make up a major part of the economy in communities across the state.

As governor, Meg will cut taxes and reduce regulations to give small businesses greater incentive to expand and hire more workers. And she’s pledged to make certain California is competitive with other states by streamlining regulations and modifying workplace rules.

Meg is determined to make a difference and she knows more about spurring job creation and running complex budgets and organizations than any other candidate in this race.

California needs a seasoned leader like Meg Whitman who can get us out of our economic mess and restore discipline in Sacramento.