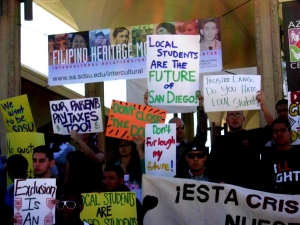 San Diego State University's budget has caused student enrollment to be reduced by 4,618 by Fall 2010. Recently, the university announced that it had to change its “service area” enrollment policy to accommodate its budget cuts. San Diego State should delay its new policy for a year to allow local high school students who were working for admission in Fall 2010 and under the old guidelines to be admitted.

The controversial issue is one of fairness. The students who are applying this November played by the old set of admission rules, but two weeks before application, San Diego State changed the rules. The students cannot now work to change their SAT scores or GPA at this late date.

Since 1999, the freshmen student population at San Diego State has been derived in part from a local “service area” which is given extra points to allow local students college admission. However, for the past few years, in harder economic times, the number of “service area” students applying has increased. However, under the new admission policy, only 37 percent will be granted admission, which means hundreds of local students will readily be turned away.

Of course non-resident student enrollment generates a lot more income for the university, but we must find a way to give our local students the first option of attending our publicly funded universities. While student diversity population is important, our local communities already consist of highly diverse populations, so this is not a reason to enroll more non-resident students.

California community colleges and state colleges provide families from local communities the most-cost effective way for their children who live at home to obtain an education. If admission cuts are made, they should first be made to out-of-state students applying to attend our local public universities so we can accommodate our local students. San Diego State has long been the educator for the region’s workforce.

November 30 is the deadline for enrollment. We must be vocal in asking our state and local officials to find a solution to the enrollment problem instead of turning community members away. People with strong ties to the community are much more productive. In times when our economy is hardest hit, we need to find a way to help those from our own communities move into higher education with the promise of better paying jobs from that education.

Tracy Emblem is an attorney and a Democratic candidate for U.S. Congress, California's 50th District.  The opinions expressed in this editorial reflect the views of its author and do not necessarily reflect the views of East County Magazine.  If you wish to submit an editorial for consideration, contact editor@eastcountymagazine.org.

This is not a good thing.. the education budget need to be extended not cutted.
Oferte cazare