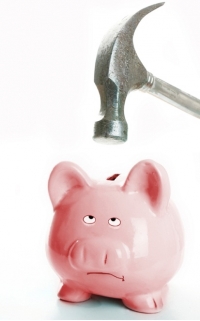 University of California's Regents just voted to hike tuitions 25% over the next five years. As a graduate of the UC system and a parent of two recent UC graduates, I have seen first-hand the negative impacts of recent tuition hikes. I fear the latest hikes will make college an impossible dream for many students and an onerous burden for many more.

As a student decades ago, I was able to graduate from UC by working during the summers, with some help from my parents.My husband, whose father died young, also managed to afford a UC education with help from family and later, I worked to help put him through law school at UC Davis.

Later, as parents ourselves, we saved for over 20 years to set money aside for our children’s college funds, based on what financial experts advised would be enough when they were born.

But it wasn’t even close, due to the staggering tuition increases at the UC campuses that have already occurred in recent years.  Our piggy bank, so to speak, was soon empty.

Our oldest son had to work a part-time job throughout his school years and thankfully qualified for some scholarships to complete his education at UC Berkeley. By the time our daughter went to UC San Diego, tuitions were so high that she had to work multiple jobs and take six years to complete her higher education, taking the minimum number of units each semester and also going back to community college to complete some courses that were cheaper. She's now in grad school and will graduate saddled with debt.

Tuition hikes came on top of unjustifiable increases in other college costs. It’s now more expensive to live on campus than to rent an apartment off campus. Back in my era, off campus living was the most affordable option. It should not be a money machine for the campus, but rather a way to assure access even for students of limited means.  Similarly text book prices have skyrocketed, with some costing several hundred dollars apiece.   At the same time we’ve seen elegant new buildings built on campus and executives receiving generous raises.  Those are luxuries that should not come on the backs of students.

Meanwhile student debt has skyrocketed, with the average college graduate taking years to pay off debts that in some cases as high as our parents’ generation owed for mortgages on their first homes.  That’s partly due to soaring college costs and partly to jacked up interest rates that in some cases sound more like loan-sharking than low-cost college loan rates. This is a shameful situation.  Moreover, many recent grads have not even found jobs in their fields due to a struggling economy, further dimming their future prospects of getting out of debt.

The high cost of college may discourage many of our best and brightest students from even seeking a university education, forcing some to settle for low-wage jobs, trade schools or the military instead as their only options.

The state, too, bears some burden for reducing its investment in higher education over the years – in particularly conservatives in the Legislature who have overall been downright miserly when it comes to investing in our children’s future, and liberals who approved generous pension deals without planning how to pay for them.   Taxpayer revolts over the years also forced cuts in government spending but at a high cost for students.  Taxpayers did approve Prop 30 to increase funding for education—and the Governor should assure that the UC system receives its full fair share of that pie.

Some nations in the world provide free university education for all deserving students.  Many others seek to make it as affordable as they can. Here in the U.S., California once led the nation in high quality and affordable college and university education.  But now the UC system is becoming a haven for the wealthy, not an institution with doors open to all who pass academic muster.

Some leaders such as Speaker Toni Atkins are now speaking out, seeking to boost funding to the UC system and see tuitions rolled back to once again restore affordable higher education for California students.  That deserves an “A” for effort, but whether she can win passage and force the Regents to not simply take the money and keep jacking up tuitions remains to be seen.

Our state and the UC Regents should stop balancing their budgets on the backs of already overburdened students and work to improve college affordability.  To do otherwise amounts to a failing grade for those charged with assuring access to our UC system for the students of California.