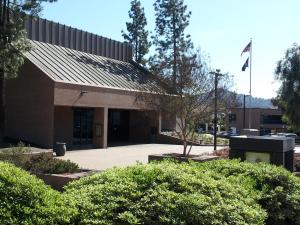 April 23, 2013 (El Cajon) – This afternoon, the spotlight will shine on the El Cajon City Council as it considers whether to enter into discussions with the Grossmont Union High School District on a potential partnership to reopen the East County Performing Arts Center (ECPAC).  The plan potentially could also including building a state-of-the-art, multi-use facility adjacent to ECPAC, filling a community need for meeting space as well as an additional entertainment venue to create a broader cultural hub for the community.

It’s time for city leaders to take center stage and provide leadership to reopen ECPAC, the jewel of East County’s cultural community.  Shuttered in disrepair for several years, the darkened theater has negatively impacted businesses downtown as well as arts lovers across our region.

A partnership with the school district could be a win-win situation, though there are challenges that must be explored and overcome.

From the City’s standpoint, such a partnership could bring substantial benefits at  reduced costs. Reopening the theater, plus adding a multi-use facility utilized by students and their families from several schools across the district could bring new faces to downtown, potentially benefitting merchants and the City’s bottom line through increased sales tax.  A vibrant theater and multi-use center could also make it easier for the City to attract a quality hotel builder, as Council members have long sought to do.

From the community’s standpoint, having the theater reopened clearly is preferable to having it crumble into further disrepair, provided the long-term goal is to expand availability of programming to bring enrichment in music and the performing arts to residents across East County and beyond. Groups such as Chambers of Commerce and nonprofits seeking large venues for meetings, charitable events and community festivities also stand to benefit.

From the District’s standpoint, investing in a central and high-quality performing arts center with large seating capacity and superior acoustics, as well as a separate multi-use facility, also has some clear benefits.  The District would have a venue for large events such as graduations, board meetings, and community outreach programs.  It could also potentially save money by  not building individual theaters or multi-use centers at each district campus, as has been proposed.

The numbers must be crunched, but if savings prove substantial, perhaps the monies could be spent to finally build the long-promised 12th District high school in Alpine, making this a true win-win scenario for all.

There are other  issues to explore.  Chief among those is the question of whether it is legal for a school district to invest in improvements to a property it doesn’t own.  One possible work-around to that obstacle that has been suggested would be for the City to sell ECPAC to the GUHSD for a dollar, just as the local community college district once sold ECPAC to the City of El Cajon for the same bargain-basement price.

Selling off the theater to the school district raises its own set of issues.  If this route were pursued, the City should require safeguards such as a clause that requires the theater be transferred back to City ownership if the District ever fails to maintain it,  restricts adequate access by the public and community groups, or looks to close or sell the theater.

Another issue is public access.  The theater belongs to the community – and its primary role should continue to be meeting the cultural needs of East County.  Community groups should have access to stage performances a reasonable number of days each year.  The theater could also be leased to outside entertainment groups.  Ultimately, many community members have voiced a longing to have headliner stars return to ECPAC someday, though the cost of this likely remains prohibitive for now, but any deal should be structured to restrict the number of days that the theater and multiuse center could be utilized by students and other school-related groups to assure adequate access for all.

If it is possible to forge a deal with the theater remaining under City ownership, that would be far preferable.

Transportation is another issue. How would students be moved from campuses to ECPAC?   This is likely a solvable issue, but one that must be addressed.

Council and District representatives should also look at ideas presented by community members, including the Save ECPAC group’s proposal which contained many intriguing concepts to improve ECPAC’s viability. For instance, the group suggested adding a backstage patio for VIP-type events and a removable dance floor over the orchestra pit to also increase attractiveness to concert-goers.  Despite past differences with some in the organization,  Council members should take the high road and consider the good of the community in picking and choosing the best possible ideas, wherever they originated.

An advisory board with members from the arts community, area residents and business owners, school district and city representatives should also be formed if the project moves forward to assure that ECPAC’s core roles as a performing arts center and community theater  are enhanced  along with meeting educational goals.

It takes a dedicated cast working together to stage a successful performance, as every actor and stagehand knows.   We support efforts by  leaders in both the city and the GUHSD to enter into talks on potential ways to restore and revitalize ECPAC, also filling the community’s need for more meeting spaces with a new multi-use facility to enhance the finest theater in East County.

As an East County native, I have many warm memories of ECPAC, from hearing my first live symphony concert there to enjoying Christian Youth Theater plays with family, live rock ‘n’ roll performances, multicultural events, and even watching my own daughter ice skate on artificial ice on stage at ECPAC during a holiday show.

While it’s too early to conclude whether  a partnership with the GUHSD is viable or the best option,  pending a robust research effort and review,  exploring the potential for such a landmark collaboration seems a prudent step—and presents an opportunity for two boards that have at times drawn controversy to instead  work together and create a positive, lasting legacy for all of East County.

The opinions in this editorial reflect the views of the author.  If you wish to submit an editorial for consideration, contact editor@eastcountymagazine.org.