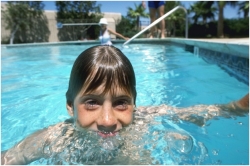 May 30, 2011 (Washington D.C.) – If your home has a pool or spa, be sure to check these websites for details on a recall of one million drain covers by eight manufacturers announced by the U.S. Consumer Products Safety Commission: http://www.cpsc.gov/cpscpub/prerel/prhtml11/11230.html and http://www.cpsc.gov/cpscpub/prerel/prhtml11/11231.html. The sites have photos and descriptions of many recalled drain covers, with links to manufacturers’ sites for more information.

The drain covers pose entrapment hazards that could cause death or serious injury to children and adults.

Although no deaths have occurred from the current round of recalled covers, 11 deaths and many horrific injuries have been caused by drain covers in the past when a suction “lock” occurred, making it impossible to pull away from a drain with a damaged, defective or improperly attached cover. A teen girl died on her prom night in a New Jersey spa in 1996 despite several adults trying to pull her from the drain. A lifeguard, 22, got her leg caught in a drain at a YMCA pool and died. Children who sat on drains have been disemboweled by suction that pulled out their intestines. The CPSC reports that from 1999 to 2008, there were 83 reports of pool and spa entrapments; 11 victims died and more suffered lifelong consequences of their injuries.

The recalled drain covers were incorrectly rated to handle the flow of water through the cover, which could pose a possible entrapment hazard to swimmers and bathers.

The U.S. Consumer Product Safety Commission, an independent federal regulatory agency, has a toll-free hotline at (800) 638-2772.