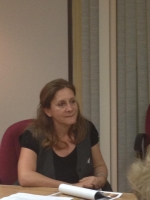 March 27, 2014 (El Cajon)—“I think it’s being in the right place at the right time,” El Cajon Councilwoman Star Bales said of her appointment to the City Council.  Bales admits she was shocked to be chosen by Councilmembers, adding that she is “in the process of learning while working with them.”

Bales made the remarks at the Pacific Southwest Association of Realtors (PSAR), Government Affairs Committee meeting on March 19.

She voiced pride in her accomplishments while living in El Cajon. She has gone to college, gotten good jobs, and has had great neighbors. “The city of El Cajon is where I volunteered in the art world,” she added.

A rarity in politics, Bales is guided by ethics over popularity. “It’s ok if people don’t like me,” she stated. “I don’t really care who doesn’t like me as long as I’m doing the right thing.”

She told the group that if they come across people who disagree with them, “Just have a little more patience…but you do the right thing. I think that’s what leaders should do. Just love them all.”

Her main focus has been on promoting the arts. “Often the arts fade away first.”

Cheryl Alvarado brought up the new AB 811 HERO (Home Energy Renovation Opportunity)program  that President Barack Obama had passed in 2008. This will soon exist in El Cajon. This program allows “homeowners to finance home and water efficiency improvements through their property taxes” (see: http://www.prnewswire.com/news-releases/western-riverside-countys-hero-financing-for-energy-efficiency-improvements-hits-50m-in-approvals-171563081.html).  Bales said she would share her thoughts after she learns more about it and how other cities have handled it.

At the end, Bales passed out a flyer for the Veterans Crisis Line number. Recently, Amvets visited El Cajon, explaining the fact that 22 veterans die each day by suicide. Bales urged the group’s members to put the number in their phone just to have it as a reminder. The number is 1-800-273-8255.

Earlier, Dennis Davies, deputy director of El Cajon’s public works department, gave a PowerPoint presentation with an update about the city’s sewer bill as well as what the future plans are. Davies mentioned that since the department is so far behind in its billing, they will send out bills for two months every month until they are up to date this September. The public will get notices in the mail about it this week.

PSAR will have a East County Diversity forum on Friday April 4 with a breakfast at 8:30 a.m. and the forum at 9:00 a.m.at the PSAR East County Service Center, 1150 Broadway, El Cajon 92021. The focus is on understanding the community’s key issues that are impacting East County residents. El Cajon’s Mayor Bill Wells, Councilwoman Bales, Congressman Duncan Hunter,  El Cajon Police Chief Jim Redman among many others will be joining the discussion with PSAR. For more information, email: sally@psar.org or call 619-579-0333 by March 28.

View the Amvets March membership report for an online flyer with the veterans crisis line: http://www.amvets.org/pdfs/Membership-Monthy-Report-March.pdf.

See the advertisement about the recent Amvets event: http://www.eccalifornian.com/event/operation-save-just-one-suicide-prevention-seminar.