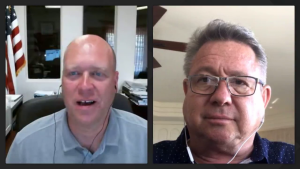 May 8, 2020 (San Diego’s East County) -- “When people are bored and feel trapped, they often resort to using drugs and alcohol. We’re going to see a huge increase in drug and alcohol abuse that’s going to have a corresponding effect on domestic violence and other problems like that,” said El Cajon Mayor Bill Wells (R) as a part of an hour-long question and answer webcast presented and moderated by San Diego County Republican Central Committee Chairman Tony Krvaric last Tuesday.

Members of the public who found out about the webcasts also were able to participate with online questions. Earlier in the day, Santee Mayor John Minto (R) also participated in a similar webcast with Krvaric along with San Marcos Mayor Rebecca Jones (R) and Coronado Mayor Richard Bailey (R).

Wells went on to say that independent of the COVID-19 virus itself, the social costs will be large and significant. “This is certainly going to bring on a lot of health problems that may take as many and much of a toll as the COVID virus would. We’re going to have some people who are depressed or kill themselves.”

Wells, who holds a doctorate in psychology besides his responsibilities as mayor of the City of El Cajon, is founder and chief executive officer of Broadwell Behavioral Health. He has worked as a registered nurse in clinical psychology, as well as served as an adjunct professor and has held diverse positions at various psychiatric hospitals. 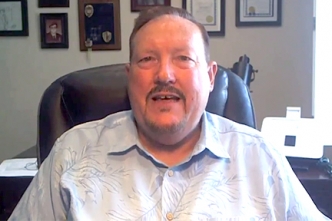 “We’re going to see a huge spike in the number of people who have killed themselves in this period of time versus a period time there wasn’t this. It is certainly something worth looking at. Ultimately, we should not be ignoring it,” he said.

Wells also said that in spite of the loneliness aspects of the government stay-at-home order, the average person has access to many telecommunications tools. “But you should also be talking to your families, be talking to your friends, and just be worried about people who live alone.”

Wells began the webcast with encouraging words, noting how local residents have been a “good job” of weathering the crisis by staying indoors, practicing good personal hygiene. “They’ve waited for this month to be over so we can get back to normal,” he added.

He said that the time has come for the community to cautiously begin re-opening. “I worry seriously what is going to happen to the lives of people are not going to work, what is going to happen to people who own small businesses, those people who own large businesses, for that matter. For the restaurants, and all of the other places that can’t be open,” Wells said. ““We have to be cautious about it but move forward without putting [people] into overt risk.”

East County Magazine submitted a question to Wells about the future of the city’s nascent relationship with the concert promoter Live Nation, which has had to cancel all shows at some 30,000 venues around the world including The Magnolia, formerly the East County Performing Arts Center. As a result, it has sustained massive financial losses amounting to $7 billion because crippled concert tours and attendance. The sports and concert producer has announced a policy to refund patron ticket purchases for cancelled shows.

To buffet those losses, the government of Saudi Arabia wealth fund has purchased a 5.7 percent stake in the entertainment corporation, giving Live Nation a $500 million dollar financial pillow to rest on.

Wells said that the city’s relationship with Live Nation has been extremely successful so far, with the city already turning a profit within the first quarter, when it was expected that this would only be happening by the fourth year of the relationship.

In his opening remarks, Santee Mayor John Minto said that like many other cities in San Diego County, Santee has been hit hard by the mandated “stay home” order. “Santee has had to close its parks like everyone else. But the really great thing is that we’ve been able to keep our trails open, and one of our trails go through one of our biggest parks which is Mast Park.” (Santee has since reopened most portions of Mast and Woodglen Vista parks.)

While Minto objects to the county order as of May 1 which requires residents to wear masks, he urged compliance. “I don’t know about you, but I really don’t like masks on my face, but we have to do it.”

He acknowledged that he had been approached by citizens who have directly asked him why they have to comply with state guidelines on social distancing. “You’re the city, you’re the mayor, just make it happen,” he indicated residents have said. “I’d love to do that because I like going to a coffee shop and seeing all of the people and talking to everybody. But there are a lot of things we do to that have to happen,” he said.

Minto said that he and Vice Mayor Laura Koval has taken steps to assemble an informal working group comprised of individuals with experience in manufacturing, fast food, sit-down restaurants, and even the operator of the legacy Santee drive in theater to help in the re-opening of Santee. “I want hear from people who are having troubles and take their ideas on what to do – what we can do – to get things open again,” he said. “We all have to brainstorm about this. We’re going to have fun with this.”

During the crisis, having taken a cue from the videos produced and released by San Diego Supervisor Jim Desmond with his daily COVID-19 updates. Minto has taken to the various streets and parks of Santee and made videos of his experiences interacting with local citizens.

“If you saw me with my iPhone and a step ladder with my laptop on it so I can see my notes, you would more think it was like a 1920s Cecile B. DeMille production,” Minto laughed.

But on a more serious note, Minto once again addressed the question of civil liberties and safety during the pandemic. “Even if we don’t agree and we feel our civil liberties are being violated – and I feel just like you – we need to ask the question, what gives the right [of the county] to do that. I’ve started writing  a paper called, “The Pandemic and Civil Liberties.”

“What I’ve learned – and I’ve spent a lot of time on this – this is something that has been debated on a local level, the state level, and the federal level. From the lower courts to the United States Supreme Court for over 160 years.” Minto went on to say that since 1905 that a case went to the United States Supreme Court (Jacobson vs. Massachusetts) which gave police power to states.

At the conclusion of the webcast, Minto invited local residents to contact him through e-mail link on the City of Santee website at