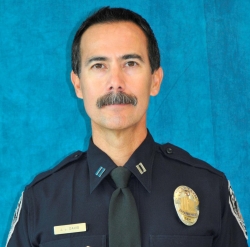 Davis, 53, graduated from El Capitan High School in Lakeside and attended Grossmont College.  He received a bachelor’s degree in Business Management from San Diego Christian College. He began his career as a Police Officer with the El Cajon Police Department in 1986.  He was promoted to Police Sergeant in 1999, Lieutenant in 2006, and Captain in 2011.

During his tenure in the Police Department, Davis has served in a variety of roles.  Early in his career he served as the School Safety Officer in the Traffic Division, which oversaw the safety programs of 23 local schools.  He also served as a Training Officer while supervising Police Recruits at the San Diego Regional Police Academy.

He was a member, instructor and team leader for the City’s Special Weapons and Tactics (SWAT) Team.  In 2001, as a member of the SWAT Team, Davis was a responder to active shooter incidents at both Santana High School and Granite Hills High School.

During his assignment to the Investigations Division, Davis worked in the Crimes against Children Unit. In this role, he coordinated the implementation of a Department of Justice grant to address street level drug dealing on El Cajon Boulevard.  He also served as the Department’s Training Manager and recently managed the Crime Analysis Division, which includes the City’s state-of-the-art Crime Lab.

City Manager Williford stated that “Captain Davis is uniquely qualified to continue the innovative and successful policies of the El Cajon Police Department as seen under Chief Redman.  From his time on the City’s SWAT Team to his leadership role in El Cajon’s diverse cultural community, Jeff has exhibited all of the characteristics that will make him successful as the City’s next Police Chief.  Importantly, Jeff has developed the support of his officers, City staff, the City Council and the community at large.  We expect that this will be a seamless transition.”