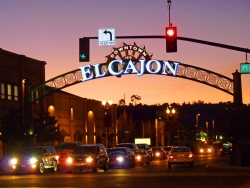 October 22, 2013 (El Cajon ) – By a unanimous vote, El Cajon’s City Council today voted to enter into an exclusive negotiation agreement with Excel Hotel Group to develop a Marriott Courtyard hotel at the northeast corner of Magnolia Avenue and Rea Street in the Civic Center block.

The proposal hinges on the state selling and to the city of El Cajon at the corner of Magnolia and Rea.  The City would then sell the land to Marriott for a dollar and give up a portion of the transient occupancy tax (TOT) for a few years.  At the end of ten years, the city expects to receive enough revenue from property taxes and TOT to repay the city the cost of the land.

“It sweetens the pot for them to spend several million dollars,” Councilman Gary Kendrick told East County Magazine.  He calls the deal a “win-win” for all parties.

“Everybody wins because the state wants money right away; we’ll give it to them right away.  Taxpayers win with a beautiful hotel downtown. Businesses win because people in the hotel will go to all the restaurants and businesses. The city wins because this will generate property tax, sales tax, and TOT revenue to hire more police and firefighters,” Kendrick said.

The 120-room hotel project would be the first major hotel east of Mission Valley and is expected to attract San Diego tourists seeking less costly lodging. It could also draw people visiting patients at a 10-story Kaiser Hospital also set to be built in downtown El Cajon.  The location would be close to trolley service and about a 20 minute drive to attractions such as the Zoo and downtown.

It’s also close to the East County Performing Arts Center, which is slated to reopen following renovations in late 2014.  “The theater helps the hotel and the hotel helps the theater,” Kendrick said. “We can have banquets in the hotel for performing arts events.”  Headliners performing at the theater will be able to stay at the hotel.

Another plus is that the project is expected to bring “many, many jobs to El Cajon.”  No one spoke in opposition to the proposal.

Far less congenial was a complaint lodged against Mayor Mark Lewis by members of the Iraqi Chaldean community, who asked the Mayor to apologize for remarks they viewed as racist. The comments were made in an interview with The Progressive magazine.

In that publication, Lewis said that some Chaldean schoolchildren who receive free lunches are “being picked up by Mercedes Benzes.” He added, “First time, they come over here, it doesn’t take them too long to learn where all the freebies are at.”The Mayor further stated that this situation causes “a lot of resentment in regard to veterans,” who ask, “Why can’t [the federal government] support veterans like they support minorities coming over here?” According to Lewis, the situation is resulting in  “white flight.”

The complaints come just days before a deemed approve alcohol ordinance takes effect that was opposed by some Chaldean business owners and by the Neighborhood Market Association, which represents the Chaldean merchants.  Mark Arabo with the association called on the Mayor to apologize.

Lewis told ECM news partner 10 News that he did not believe his comments were offensive.  Councilman Kendrick noted that Lewis has previously appointed two Chaldean community members to serve on the city’s Planning Commission.