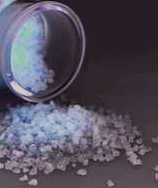 Bath Salts are a synthetic, stimulant powder product that contains amphetamine-like chemicals, including mephedrone, which may have a high risk for overdose. Because the drug is new and some of the contents unknown, using it in any way is highly dangerous, police warn.

Between January 2011 and February 2011, there were over 250 calls to U.S. poison centers related to bath salts. This is well over the 236 calls received for all of 2010. Bath Salts are a dangerous drug whose full risks and effects are still unknown. What doctors at poison centers have reported is that Bath Salts can cause rapid heartbeat, high blood pressure, chest pains, agitation, hallucinations, extreme paranoia and delusions.

"In El Cajon, we had six documented incidents within the last 12 months," said Lt. Mark Coit. Each of these calls required hospital admittance. This does not include the numerous “unknown type” narcotic related requests for service.