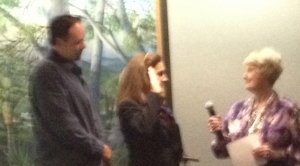 After the meeting, Bales told ECM that she is “very honored” to be chosen.  “When Councilman Bob McClellan said my name, I cried a little bit,” admitted Bales, whose integrity and willigness to stand up against special interests as a planning commission member were key factors in Council's decision to select her.

She added that her family has been "very supportive" of her decision to run for the Council. "They’re happy for me.” Bales said she has wanted to run for Council since the deemed approve alcohol issue arose.

During her testimony to Council last week, she spoke about her difficult choice on the alcohol issue, since she has friends who own liquor stores, but ultimately she voted for the alcohol ordinance to crack down on stores selling alcohol to minors or serial inebriates because she believes it is in the best interest of the community overall. In the end, her integrity and backbone appear to have been key factors that swayed Councilmembers in her favor, along with her ability to speak the languages of major ethnic groups in El Cajon.

The appointment comes on the heels of comments by former Mayor Lewis that were deemed insensitive to Middle Eastern residents, thus the appointment of Bales is a step toward healing that rift.

Last week, we brought you coverage of the first half of the candidates. At this week’s meeting, the remaining candidates spoke out. Below are highlights of a few of them.

Lily Schworm (photo, right), who previously ran for Council, said she believes the East County Performing Arts Center should not be a “tax funded project.” When Pro Tem mayor Gary Kendrick asked if she would accept campaign contributions from the liquor store or the Neighborhood Market Association, she said she would decline for a few reasons.  “I refuse to be bullied. El Cajon is small enough that we don’t need contributions. I don’t support what they’re pushing.”

Christopher Shamoon, (photo, left) a Chaldean and former Council candidate, has volunteered for the city in many different ways, including with the Live Well San Diego East Region Healthy Food Initiative. He also is in favor of ECPAC reopening but not until there’s a business plan that can make it profitable.

Anthony Sottile, who has been on the planning commission, wants to be involved in “assimilation” of new immigrants. An Italian American, he mentioned he is a “surviving immigrant” and “I can relate to the immigrant community.”

Katherine Spacone, who has been a special education teacher for 32 years, came to politics “because I was very concerned about the future of our country.” She has also been involved in the ECPAC foundation with Shamoon and Duane Swainston, another candidate. Regarding the policies of the Council, she would like it “if we can ease the regulations of bringing business in.” She also sang praises of how Council and staff have handled finances. “I was very impressed with the financial soundness. El Cajon is in pretty good shape. Can we do more? Of course, we can always do more.”

After the interviews, Council discussed the options. Kendrick was in favor of Bales being appointed right from the start. He revealed, “The city has been sued by some liquor stores trying to change or overturn the deemed approved [alcohol] ordinance and we need someone who has the courage to stand up to these liquor stores. They’re essentially trying to take over this city. We’re really fighting for the soul of this city.. This could be the greatest threat the city has ever faced.”  He said he admired Bales for “having the courage to stand up to the liquor stores” with her vote for the ordinance as a planning commissioner. He believes she “has the ability to convince them to be reasonable.”

Councilman Bob McClellan was also in favor of Bales, noting that she speaks Arabic and Aramaic and thus can communicate directly with the many Middle Eastern immigrants in El Cajon.

Councilman Tony Ambrose felt she should stay in the planning commission for now. Other candidates discussed as serious contenders were Sottile, Vickie Butcher, Darrin Mroz, Michael Griffiths, Shamoon, and Stephen Nissou. In the end, Councilman Ambrose suggested a motion be made. Kendrick made a motion to appoint Bales with a second from Councilman McClellan. The vote was 3-1 with Ambrose against.

Bales fills the vacancy left on the Council after Bill Wells was appointed Mayor, following the resignation of former Mayor Mark Lewis.

The city's website refers to Ms. Bales's first name as Intsar, not Instar.  Is a correction needed in your story?

She explained in her testimony that so many people called her Star that it became her nickname.