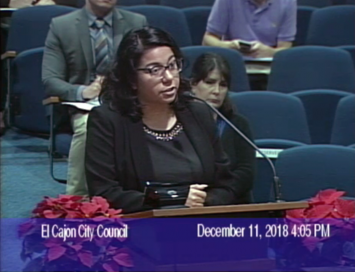 December 14, 2018 (El Cajon) -- The El Cajon City Council on Tuesday unanimously voted to approve a proposal asking staff to prepare letters to the California Department of Social Services and the U.S. Department of Health & Human Services asking for a review of Southwest Key Programs, Inc, The Texas-based company provides extended care for undocumented immigrant children. Its El Cajon facility, known locally as “Casa San Diego,” contracts with the federal government to provide care to children who show up at the U.S.-Mexico border without any parents, as well as some children who were separated from their legal guardians by U.S. immigration officials.

“These are children, and this does have an impact on our community,” said Councilman Goble, who indicated his intent to seek information and alert those with oversight of these inconsistencies.

Kendrick stated, “The primary purpose of government is protection” of people, “including those who are undocumented.”

The facility, revealed in City of El Cajon public documents as located at 1160 Broadway, houses about 65 children from ages of 6 to 17. Southwest Key reportedly operates 27 similar shelters across California, Arizona and Texas.

Ana Babudar, Southwest Key’s Assistant Program Director, told the City Council that the company met with California Department of Social Services officials earlier this year. She said the organization had not been cited for any of its reporting problems.

“We hold three licenses in San Diego and we do all the reporting accordingly to them as well as to other agencies that we report to,” Babudar told the City Council. She added that they have been operating since February 2016 within the city of El Cajon. “We have been great community members,” she stated.

The City Council was invited to tour the facility at Broadway and Oro Street. Coucilman Kalasho stated he would like to go on the tour.

East County Magazine requested to be a part of the tour alongside the San Diego Union-Tribune, however, Babudar denied the request. She told ECM that journalists are allowed inside the facility “under no circumstances.”

A regional director for Southwest Key, Seby Sebastian, said that Southwest’s policy is to report when children run away from the facility, but disturbingly, the company does not follow up to learn where these children end up.

The Union-Tribune in October reported that the California Department of Social Services investigated Southwest Key in July when they failed to provide children adequate food, including options when they don’t like what is served. The State instructed the company to correct the deficiency or face civil penalties.

Because the children’s facility is run under the jurisdiction of the federal government, the City of El Cajon has no regulatory authority, except for any zoning and land use issues. The document authored by Goble and Kendrick states that the City taking a direct interest into the operations of the Casa San Diego “are not outside of the City’s rights and purview.”

One member of the public, Bonnie Price, spoke on the issue.“I’m concerned on a national scale,” she told Council, noting that Homeland Security has recently dropped vetting requirements to screen out workers with a history of abuse. “It’s very important that there be inspections constantly to assure that people are not being harmed,” she concluded.

“Casa San Diego,” contracts with the federal government to provide care to children who show up at the U.S.-Mexico border without any parents" We are a sovereign nation that is being used and abused by adult "illegals", using children to gain sympathy and free services at our expense. Casa San Diego is Mexican in name, asking me to pay for their agenda. I strongly object.
It's actually Southwest Key that is contracted with the government to provide those services. Maybe you won't object about your tax dollars being spent since that name doesn't sound so "Mexican in name".
Are the operators hiding something? In light of investigations, one would think they would want better transparency.