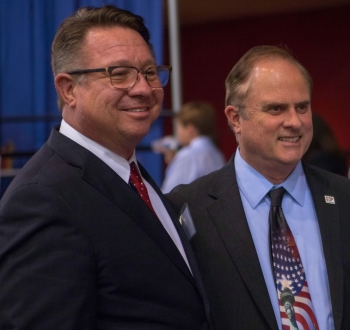 Despite the election upset, however, Kalasho will remain on the council for the remaining two years of his term for his existing seat, which he was elected to in the last city-wide contest in 2016. Kendrick, who has been on the city council since 2000, will serve until 2022.  This was the first election since the City of El Cajon followed a voter-approved state mandate in Nov. 2016 and established specific districts. In Jan. 2017, the City Council initiated a process to adopt a City Council District Boundary Map and adopted it as an ordinance in June 2017.

Kalasho had been expected to run against Wells in the mayoral race, but papers at the last minute instead to run for the newly-created Dist. 1 council seat against Kendrick, since both live in the Grossmont-Fletcher Hills area.

While Scalzitti’s prominent red-and-white signs were posted throughout the city of El Cajon streets and byways vs. Wells’ low-key campaign which focused on using campaign mailers, most attention was focused on the race between Kendrick and Kalasho.

Early on in the campaign, the Kendrick/Kalasho race experienced movie-like drama along the way, including videos of Kalasho at the wheel of his golf cart pursuing Kendrick’s golf cart on the campaign trail on the streets of their district. One of the incidents involved Kendrick’s son and campaign manager, Jesse, who reported a threatening pursuit to the El Cajon Police. In a similar incident,  Councilman Kendrick himself ended up filing a report which resulted in El Cajon Police Chief Jeff Davis calling Kalasho and advising him to quit harassing Councilman Kendrick with the golf cart.

Kendrick’s campaign included both mailers focused on his positive accomplishments as well as hard-hitting mailers and flyers focused on Kalasho’s serious legal and ethical challenges. Kalasho is in the midst of a civil trial over sexual harassment and defamation claims, with a judge deeming “true” a substantial body of factual evidence. Kalasho also had to deal with  revelations by ECM that he was still under probation during most of his campaign, after he pled guilty to criminal workers’ compensation fraud in connection with his Santee car wash business prior to his 2016 election.

Kalasho, 35, who was born in Iraq and immigrated with his family to the United States. He was elected initially with backing from the Democratic Party, running as a reform candidate seeking to be a voice for the people, against what he characterized as old-boys Republican leadership.

But Kalasho recently left the Democratic party and ran this time as a no-party-affiliated candidate  His campaign this time took a conservative tack echoing President Donald Trump’s “America first” slogan. This drew criticism from the left. In his ballot statement he wrote in part, “I know that most Fletcher Hills & Grossmont residents shop in Santee or La Mesa. Why? Because it’s safer, cleaner & still feels like you’re in America. If re-elected, I promise to hire 3 new Police Patrols for Fletcher Hills and Grossmont areas. Ensuring safety and security while protecting your home values. I don’t care about party politics, it’s a waste of time. I am looking to the future. I am American first. Are you?”

The campaign between Mayor Wells and Scalzitti was mild-mannered in comparison, with Wells focused on his record of improving the city’s financial stability and Scalzitti indicating he hoped to focus on crime, homelessness and water issues if elected. Scalzitti will continue serving East County residents as an elected member of the Helix Water District board.

The City Council terms of Councilmen Steve Goble, Bob McClellan, and Kalasho will all end in December 2020.

McClellan has stated to East County Magazine that he will not seek re-election when his term expires.

Weaver got 8% in the EC mayors race, and he wasn’t even running. Kalasho got 15%. That means more than half the votes Kalasho got were from nutty people voting randomly. And today on his Facebook, Kalasho is talking about a possible run for higher office. What a dummy. Kalasho will hold onto his seat for a few months, then use it as a bargaining chip in a criminal guilty plea deal. Then, nothing. He’s done. He can’t run for dog catcher. Goodbye.

to oust Kalasho; if he's planning to use his seat as a bargaining chip to stay out of jail, he may want to do so fast.

Bessmon is a liar and a criminal. One has to wonder, with the utter and complete shellacking he suffered on November 6, will he take it for what it is and realize the people of El Cajon no longer want him on the council? Will the powers that be realize the same and initiate the long overdue recall to remove him and restore dignity to that body and to the city? Only time will tell.
Twitter "To my supporters, I’m still there for 2 more years To my haters, I’m still there for 2 more years " (Ignorant).lacking knowledge or awareness in general; uneducated or unsophisticated.

Kalasho would be mistaken if he attributes his loss to the fault of others, or to a rejection of the ideology he originally ran on for that matter.  He made key mistakes.  The biggest were his repeated attacks on respected people in the community simply because they had disagreements with him, or in the case of media, becasues they reported on his actions.  We also saw across East County that voters with no party affiliation generally fared poorly and in Kalasho's case he not only left a political party (Dems) but wildly swung his rhetoric to sound like Trump with "America first" and arguably anti-immigrant words,  leaving him without a base on either side and further eroding the trust of voters.

If he stays on the council and doesn't step down, he would be wise to show some humility -- apologize to voters for making personal attacks in the past on those who disagreed with him and resolve to stop doing so for the good of the city.  Promise to make a fresh start and strive to spend the rest of his term (if he's not arrested or recalled) to do his best to strike a conciliatory tone and work with, not against, fellow councilmembers. Invite the public to submit ideas for real reforms, as he ran to do in the first place, and come up with some sort of solid legislative proposal(s) -- not hundreds of agenda items, but a handful of actual positive ideas that arenot self serving, but that would serve some under-served segments(s) of the public in order to try and salvage some sort of positive legacy instead of the very negative record that he currently has of divisiveness and derisiveness.  That doesn't mean he has to agree with policies he disapproves of, it simply means treating people decently even if you disagree. There are many who have called on him to resign and this is also an option for him if he wants to focus on other priorities in his life, along with his family.  But if he chooses to stay, clearly the path he's been following is one that voters resoundingly have rejected, and no good will come of continuing down that same trajectory.  Which way does he want to be remembered?